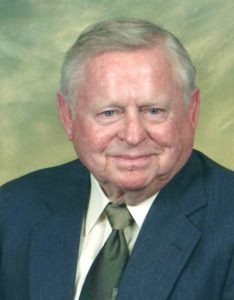 J.L. was born April 6, 1930, in Alexander County, the son of the late Issac Leroy Hammer and Amanda Hefner Hammer.

He was the co-owner of Hammer Motor Company for over 40 years and was a member of Reformation Lutheran Church. He enjoyed watching NASCAR racing. He loved traveling to the mountains and going to car auctions and enjoyed tending to his cows.

Including his parents, he was preceded in death by a son, Danny Ray Hammer; a sister, Lula Mae Hammer; and four brothers, Cyril, Kennith, Howell and Fred Hammer.

Those left to cherish and honor his memory include his wife of 69 years, Evelyn Morrison Hammer; his son, Rickey Dale Hammer and wife Judy of Taylorsville; his daughter-in-law, Glenda Hammer of Taylorsville; his grandchildren, Shena Moore and husband Patrick, Haley Hammer, and Stefany McIver and husband Calvin; his great-grandchildren, Evan, Colton, and Gracelynn; his step-granddaughter, Mellisa Breden; his step-great-grandchildren, Cayden and Kyler; sisters, Martha Ann Aikman and Shelby Jean Woodward; brother, Steve Hammer; brother-in-law, Larry Morrison; and a number of nieces and nephews.

The funeral service will be held at 3 p.m., Wednesday, January 29, 2020 at Reformation Lutheran Church. Pastor Craig Sigmon will officiate. Burial will follow in the Taylorsville City Cemetery. The family will receive friends from 1:30-2:45 p.m. prior to the service.