By D.N. PENNELL, Jr.
The Alexander Central JV and Varsity Basketball Teams headed to Boone on Tuesday, January 28, to face the Watauga Pioneers in four NW 3A/4A contests.
The day was a successful one for the Cougars as the visitors claimed three wins in four contests. The day was capped off by a 57-43 win by the ACHS Varsity Men in a key game in the NWC standings. 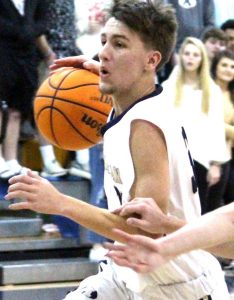 The Cougars never trailed in the game and upped their overall record to 11-8 with the victory. The win also ran Alexander’s record to 4-3 in conference games and completed a regular season sweep over the Pioneers. The loss dropped Watauga to 6-11 overall and 3-5 in the NWC.
Alexander shot 55 percent from the floor and dominated the paint with a 32-12 advantage on inside points. The Cougars also claimed the advantage in rebounding, topping the Pioneers 29-22 on the boards.
The Cougar offense was paced by senior Jem Lowrance, who recorded one of his best games this season. Lowrance, who has been hampered with an injury for most of the season, enjoyed a productive and efficient night on Tuesday, hitting nine of 13 field goal attempts for a game-high 23 points. The senior led ACHS with eight rebounds and handed out three assists.
Three Cougars finished the night in double figures. Lowrance led the trio with his 23-point performance, while Maddox Kerley and Evan Presnell tallied 10 points apiece. Dalton Stikeleather tallied four points, four assists, and three steals.
For Watauga, Anderson Castle led the way with 11 points.
In the varsity women’s tilt, Watauga outscored ACHS in all four periods and rolled to a 63-40 win over the Lady Cougars. The win allowed the Lady Pioneers to avenge a loss in Taylorsville in the NWC opener earlier this month.
The difference in the game was turnovers. Alexander Central committed 33 turnovers in the contest leading to 49 of Watauga’s 63 points. Watauga finished the game with 18 fast break points.
In addition to the huge points-of-turnover margin, the Pioneers also outscored ACHS from behind the three-point line. The home team converted nine of 18 three pointers for a 50 percent night from downtown. ACHS hit five of 14 three-point shots.
Taylor Lipford hit eight of 13 field goals to tally a game-high 23 points for the Pioneers. Lady Cougar junior Nikki Hagy was the only ACHS player in double figures, finishing with 10 points.
The loss dropped ACHS to 3-4 in the league and into fifth place in the conference standings. The Cougars slipped to 11-8 overall. Watauga improved to 13-5 overall and 6-2 in NWC games.
The Varsity Cougar Teams will play at St. Stephens on Friday evening, January 31. ACHS returns home to the Cougar Den for games against McDowell on Tuesday, February 4.
JV COUGAR TEAMS EARN SWEEP
Tuesday’s four-game set opened with a convincing doubleheader sweep by the Alexander Central JV Teams.
The first game of the afternoon was the JV women’s game. Alexander Central picked up its 10th win of the season with a 51-22 win over the home standing Lady Pioneers.
The Lady Cougars started the game red hot and never backed off en route to the 29-point win. ACHS built a 23-3 lead at the end of the first period and never allowed the home team to make a charge over the final three stanzas.
Grace Taraban led the Cougars with a game-high 14 points. Peyton Price added 13 points in the win. Anna Taraban and Kaley McDaniel chipped in with six points each for the Cougars.
The win upped Alexander’s record to 10-4 overall and 2-3 in the NWC. ACHS will head to North Iredell for a non-league game on Thursday, January 30, at 4 pm, in Olin. The JV Lady Cougars will return to NWC action with a home game against the McDowell Titans on Tuesday, February 4, at 4 pm.
In game two, the Alexander men completed the JV sweep with a 10-point win over the Pioneers.
The young Cougars broke the game open with a 16-10 run in the fourth period and claimed a 43-33 win over Watauga.
ACHS, which improved to 10-6 overall and 4-3 in the NWC, outscored Watauga in all four quarters before putting the game out of reach with the fourth period run.
Luke Hammer and Dusty Sigmon paced the effort with 13 points each for ACHS. Andrew Fox and Garrett Barnes tallied six points apiece in the win.
The JV Cougars are scheduled to play at St. Stephens on Friday, January 31, at 4:30 pm. The team returns home for an NWC game vs. McDowell on February 4.