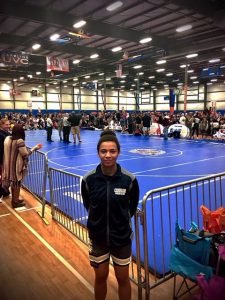 Alysha Earley became the first ACHS female wrestler to compete in the Women’s Invitational Championship this past weekend.

Wrestling history was made on Saturday, February 9, when Alexander Central sophomore Alysha Earley became the first female wrestler from the school to compete in the NCHSAA Women’s State Wrestling Invitational.  The event was held at Carolina Courts in Concord, NC in conjunction with the USA Elementary and Middle School state tournament.  Earley finished 2-2 on the day, placing her in the top six in the state in the 132 lb. weight class.
In the quarterfinals, she lost to eventual champion Sydney Sullivan from Northern Nash.  Earley came back with two wins in the consolation bracket: a pin against Estrella Encinas of West Henderson and an 8-1 decision against Alexis Byrne of Richlands.  In the consolation semi-finals, she was defeated by the eventual third place finisher Hailie Misplay of Pine Forest.
Earley finishes the year 7-3 in varsity competition and 3-2 in JV competition.  She is the first female to win a varsity match at Alexander Central and will be the first female to earn a varsity wrestling letter.
Over 170 female wrestlers from across the state competed.  There were over 380 female wrestlers in NC this season.  71 colleges now offer women’s wrestling and it is a recognized Olympic sport.  Women’s wrestling is the fastest growing sport in the United States, with an increase in participation of over 30% in the past year.
“Alysha has been an ambassador for wrestling in this community.  She embodies our philosophies and represents Alexander Central with pride and class.  She is one of the toughest athletes I know, and she is well respected among her teammates and peers,” ACHS Wrestling Coach Josh Williams said. “The sport of wrestling is growing among both males and females, and Alysha is a trailblazer for women’s wrestling in Alexander County.”