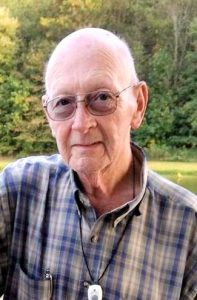 He was born to Robert Johnson and Betty Mary Kennedy Ball, in Surry County. Steve, after retiring from the Air Force having served during the Vietnam era and attaining the rank as a Senior Master Sergeant, worked at Craftmaster Furniture. Steve was a member of Stony Point Baptist Church and was also a member of the Stony Point Masonic Lodge # 593 A. F. & A. M.

Steve was preceded in death by his wife, Judith Carol Johnson; his father, Robert; and brother, Roy Johnson.

Visitation for the Johnson Family will be held on Saturday, February 15, 2020 at Alexander Funeral Service from 6:00 p.m. until 8:00 p.m. The funeral service will be held at Stony Point Baptist Church on Sunday, February 16, 2020 at 3:00 p.m. The body will lie in state 30 minutes prior to the funeral service. Military rites will be conducted by the Alexander County Honor Guard and Masonic rites by the Stony Point Masonic Lodge. Rev. Rick Norman will be officiating. Burial will follow at Stony Point Baptist Church Cemetery. Sons and grandsons will serve as pallbearers.