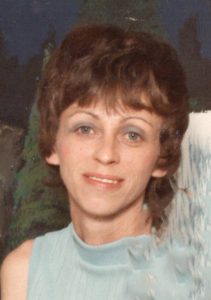 Billie Collins, 70, of Taylorsville, passed away on Friday, February 14, 2020 at her residence.

Billie was born October 9, 1950, in West Virginia, the daughter of the late William Mullins and Ruby Damron.

She had worked as a caregiver and was a member of Millersville Baptist Church.

Including her parents, she was preceded in death by a son, Michael Collins.

A graveside service will be held at 2 p.m., Sunday, February 16, 2020 at Millersville Baptist Church. Rev. Bryan Kerley will officiate.

Memorials may be made to: Millersville Baptist Church Building Fund, Taylorsville, NC 28681.

Adams Funeral Home and Cremation Services is honored to be serving the Collins Family.