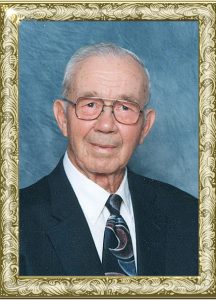 Robert was born June 30, 1926, in Alexander County, the son of the late Grover Pennell and Mary Thomas Pennell.

He was a US Navy veteran, who had served during WW II. Bob had worked for Broyhill Furniture and was a furniture craftsman by trade. He enjoyed farming and gardening. He  was a member of Tabernacle Baptist Church in Stony Point.

Including his father, he was preceded in death by a daughter, Sylvia, and an infant son; two sisters and four brothers; and two step-children, John Clay Burgess and Juanita Burgess Worth.

The funeral service will be held at 4 p.m., Monday, February 17, 2020 at Tabernacle Baptist Church. Rev. Wes Hammer will officiate. Burial will follow in the church cemetery with full military honors accorded by Alexander County Veterans Honor Guard. The family will receive friends from 3-4 p.m. prior to the service.

Memorials may be made to: Tabernacle Baptist Church @ 191 Sipe Road, Taylorsville, NC 28681.