Junior is lone Cougar to advance

By D.N. PENNELL, Jr.
Alexander Central junior Blake Martin posted a 4-2 record and earned a trip to the NCHSAA State Wrestling Championships during mat action at the 3A West Regional Tournament this past weekend.
Martin was the lone Cougar to advance to the State Finals Tournament, which is slated to begin on Thursday, February 20, at the Greensboro Coliseum. His fourth place finish in the 285-pound class allowed the Cougars to extend the school’s streak for at least one state qualifier to more than 20 seasons.
After winning his opening round match on Friday, February 14, Martin suffered a loss in the second round and dropped into the consolation bracket. The determined junior fought his way back through the consolation bracket to earn his spot in the finals. After two straight pinfall wins, Martin faced Hunter Huss heavyweight Caleb Reese in the blood round with a spot in the finals on the line. Martin earned a hard-fought 5-3 win in the match to earn his spot in next weekend’s finals. 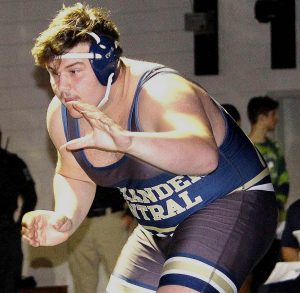 GREENSBORO BOUND – Alexander Central junior Blake Martin posted a 4-2 record and advanced to the NCHSAA Wrestling State Finals this past weekend in Hendersonville. Martin is the lone Cougar grappler to advance to the state finals this season.

He suffered a 3-0 loss in the third-place match to  finish the regional with a fourth place finish.
“We are so proud for Blake to be representing Alexander Central at the state wrestling tournament.  He wrestled smart this past weekend against some very tough competition, and I believe he is peaking at the right time.  In just his first year at AC, he has already made huge contributions to both the wrestling and football teams and I look forward to seeing what he is capable of in the future,” Alexander Wrestling Coach Josh Williamson said.
Alexander’s heavyweight will take a 24-9 overall record into the finals. He is slated to face off against Michael Carvin of Trinity High School in the opening round of the 3A finals. Carvin is the 3A Mideast Regional Champion and enters the state finals with a 41-1 record.  The 3A State Finals are slated to begin at 5 pm on Thursday evening, February 20.
Martin, who also earned All-NWC in football last fall, is the son of Heather and Allen Martin.