By D.N. PENNELL, Jr.
The 2019-2020 basketball season came to a close for the Alexander Central Varsity Men’s Team on Tuesday, February 25, with a first-round playoff loss at Ben L. Smith High School in Greensboro.
The talented Golden Eagles from Smith High placed four players in double figures and raced to a 73-44 win over the visiting Cougars in round one of the NCHSAA 3A State Playoffs. 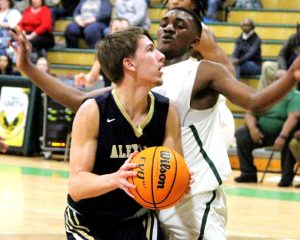 Smith led 38-19 at the half and added to its lead over the final two periods en route to the 29-point win. The victory upped the Golden Eagles’ record to 19-7, while the Cougars closed the year with a 16-12 final mark.
Silas Mason led the victors with 16 points, while Nick McMullen scored 15 points and grabbed 10 boards.
For ACHS, senior Jem Lowrance added his name to the Cougar history books when he became the fourth player in school history to reach  1,000 career points. Lowrance finished the game with a team-best 16 points and closed his ACHS career with 1,001 points.
He joins former Cougars Jeremy Fortner, Jordan Hefner, and Ryan Hargrave as members of the ACHS Men’s Basketball 1,000-point club.
Maddox Kerley added 10 points, while Zach Wooten finished with eight points in Tuesday evening’s season final in the Gate City.

By D.N. PENNELL, Jr.
After winning just two games a year ago, the Alexander Central Women’s Basketball Program made its return to the post season on Tuesday evening, February 25, with a road game at Enka High School.
Despite suffering a 67-35 loss to the Lady Jets on Tuesday in Bumcombe County, the Cougars finished the 2020 season with 10 more wins than last season.
In his first season as Head Coach, Jon Presnell led his ACHS squad to a 12-15 overall record on the year. The team returned to the post season for the first time since 2017.
In Tuesday’s setback, ACHS managed to keep the contest close early before the Jets pulled away to secure the one-sided win. Enka led 11-6 after one quarter and 28-18 at the half. The game got away from the Lady Cougars in the second half thanks to a 25-9 Enka advantage in the third period and 14-8 Lady Jet run in the fourth stanza.
For Alexander, junior guard Gracie Harrington paced the offense with 10 points. Madeleine Jenkins added seven points in the season-ending loss.