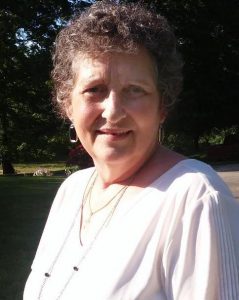 Blanche “Nanette” Lowe Jolly, 65, of Taylorsville, passed away on Thursday, March 12, 2020 at her residence following a period of declining health.

She was born on April 4, 1954, the daughter of Lola Beatrice Wike Lowe and the late JC Lowe. During her career, she was employed for 43 years at Gulf States WestRock and was a member at Little River Baptist Church.

Including her father, she was preceded in death by her brother, Jimmy Lowe.

Those left to cherish her memory include her husband of 28 years, Charles H. Jolly of the home; mother, Lola Lowe of Taylorsville; daughters, Casey Gilliland and husband Jason of Hickory, Misty Balk and husband BJ of Mooresville, and Kristen Bruce and husband Eric of Taylorsville; sisters, Julie Holdsclaw of South Dakota; father of Casey, Larry Kerley of Taylorsville; grandchildren, Garrison Duncan and Siddalei Balk; niece, Erin; and nephews, Caleb and Derrick.

The family will receive friends on Saturday, March 14, 2020, from 5:00 p.m. – 7:00 p.m. at Alexander Funeral Service. The funeral service will be held on Sunday, March 15, 2020, at 3:30 p.m., at Little River Baptist Church with Rev. Jeff Chapman and Rev. Mark Robinette officiating. The body will lie-in-state 30 minutes prior to the funeral service. Burial will follow in the church cemetery.