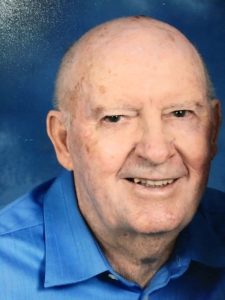 On Wednesday, March 18, 2020, Wakefield Bentley departed this earth and took his heavenly journey toward home.

Wakefield was born November 11, 1932. He grew up in Alexander County and graduated from Taylorsville High School. In 1953, he joined the United States Army where he proudly served as a Sergeant to the S Company 53rd Infantry 101st Airborne Division that served at Mt. Fuji Yama Japan Army Base. He received the following medals: Army Good Conduct, National Defense, the Korean War medal, and many more through his acts of duty.

After his military service, he began his 43 year career with Southern Bell, later becoming AT&T at his retirement. Wakefield started Hallmark Electric after receiving the NC State Board of electrical contractor license, then later obtaining his unlimited electrical license and held them until his passing.

In 1959, he married his brown-eyed beauty, Hilda, whom he faithfully adored for more than 63 years. Together they raised their five children.

Wakefield was a charter member of Forest Park Presbyterian Church, where he served as a faithful member serving in many capacities. He also helped start the scout program establishing Troop 171, where many young men aspired to earn their Eagle Scout under his leadership.

Wakefield was always happiest when his loved ones were close by.

We would like to extend a heartfelt gratitude towards all of the families, friends, and communities that prayed, supported, and uplifted our family. A special thanks to Gordon’s Hospice House will never be enough for the care of our father during his stay there.

With the current restrictions on large gatherings, we want to be respectful of our families and yours, we will postpone the celebration of life to a later date.

May you all be blessed with the inheritance of Wakefield’s life.

In lieu of flowers, any memorials can be made to Forest Park Presbyterian Church, along with Gordon’s Hospice House.

Troutman Funeral Home will be serving the Bentley Family during this time.