BRISTOL, Tenn. – The King University acrobatics & tumbling season was cut short due to the national pandemic of COVID-19. Conference Carolinas announced their all-conference team, comprised of seniors from each member school as the Tornado had three seniors named to the team. 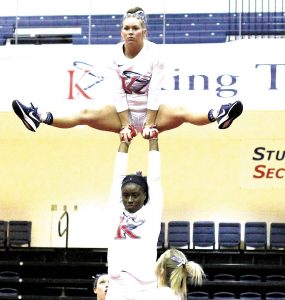 ACHS graduate Mattie Brown competed in 14 heats for the Tornado in 2020. She helped King to season-high scores in 11 of those heats. Following the first meet of the season, she was selected Conference Carolinas Biweekly Athlete of the Week award and honorable mention National Collegiate Acrobatics & Tumbling Association (NCATA) Player of the Week. The Taylorsville, N.C., native also earned NCATA Academic Honor Roll honors in 2019.
“Acrobatics and Tumbling has been a major part of my life for four years and to see it come to an end like this is saddening to say the least. This year,  with only two meets,  I was named the first ever Conference Carolinas Acrobatics and Tumbling Athlete of the Week and 2020 All-Conference. It’s an honor to receive these recognitions. I’m very thankful for all that Acrobatics and Tumbling has given me. As this chapter is closed, I’m looking forward to the next steps,” Brown stated from her home in Taylorsville last week.
Olivia Kincaid competed in 11 heats for the Tornado in 2020, helping King set nine season-high scores. Three of those scores were in the compulsory event with two each coming in the acro, pyramid and toss events. A season ago, the Richmond, Mo., native earned NCATA Academic Honor Roll honors.
Cassie Tackett appeared in two events for the Tornado in 2020, lifting King to a season-high score in the compulsory pyramid heat. In her career, the Powell, Ohio native helped King set eight different season-high scores over the last three years.