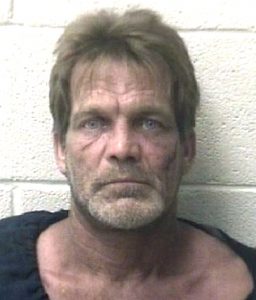 After a manhunt, local authorities have apprehended a man suspected of kidnapping and assaulting a woman.

On April 9, 2020, at approximately 11:30 a.m., Gregory Lee Hartshorn, white male, age 49, was arrested for Assault with a Deadly Weapon, Assault by strangulation, Assault on a female, Assault with a Deadly Weapon with intent to kill, Communicating threats, 1st Degree Kidnapping, Possession of a firearm while being restricted with a domestic violence order out of the state of Louisiana, and Resisting Arrest, according to Alexander County Sheriff Chris Bowman.

Hartshorn is being held in the Alexander County Detention Center with a 48 hour hold no bond.

The charges are the result of a domestic violence incident that occurred off of Church Road in the Wittenburg Community, during the early morning hours of April 9, 2020. The victim was unable to call 911 or leave the residence for medical help for approximately four hours, said Bowman.

She eventually was able to escape from the defendant and drove to a store in Taylorsville to seek help. Officers with the Taylorsville Police Department initially responded and learned the incident occurred out in the county jurisdiction and deputies with the Alexander County Sheriff’s Office responded to take over the incident.

The victim sustained serious injuries as the result of the assault. She was transported to Iredell Memorial Hospital by Alexander County EMS to be treated for her injuries.

Hartshorn was located at the residence as he was attempting to get into a vehicle and leave. He was taken into custody at that time.