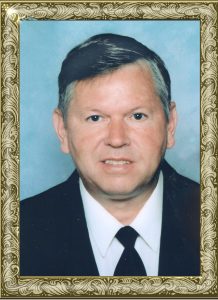 On Friday, April 10, 2020, James Wayne Walker, 75, passed away peacefully at Gordon Hospice House in Statesville. Wayne had recently battled several health challenges and he is now at rest.

Wayne was born and raised in the Central Community of northern Iredell County, the son of the late Elbert Walker and Emily Crater Walker. Upon marriage, he moved to the Rocky Springs community, north of Hiddenite, in Alexander County. Wayne was a member of Rocky Springs United Methodist Church. For the past two years, Wayne was a resident at Brookdale Peachtree assisted living facility in Statesville.

For 30+ years, Wayne worked in the Shipping Department at the Box Factory in Taylorsville (aka: Champion Paper, Waldorf, and Rock-Tenn). After retiring, he spent time traveling with his wife Catherine, gardening, and following his favorite sports teams. Some of his fondest memories were of family trips to Cherry Grove Beach, South Carolina, where he spent time with extended family and friends.

Wayne was preceded in death by his wife of 49 years, Catherine Walker (68), and his youngest son, David Walker (43). Wayne is the son of Elbert and Emily Walker and he had two sisters and six brothers.

Adams Funeral Home and Cremation Services is honored to be serving the Walker Family.