The Alexander County Board of Commissioners met online on Monday, April 20, for a COVID-19 update, as well as action on water and sewer projects.

Leeanne Whisnant, Director of Consolidated Human Services, said she was notified at approximately 5:00 p.m. on April 20 that Alexander County had one (1) new confirmed case of COVID-19, for a cumulative total of four (4) confirmed cases. She said the new case involves an individual who is a healthcare worker outside the county, tested positive, but is not yet exhibiting any symptoms of the virus. The Health Department is aware of 125 tests that have been performed, but Whisnant said that is a difficult number to calculate as she is only contacted when a positive test is confirmed.

Whisnant said the health department has enough COVID-19 tests for the acutely ill, but needs more supplies based on the Governor’s recent initiative of “testing, tracing, and trends.”

“The state is encouraging tracing now, which is a much better plan so we can track those who have been in contact with someone who has tested positive for COVID-19,” Whisnant said.

“We’re good on supplies of personal protective equipment for now, but we don’t know how long this pandemic will last,” Gillispie said. 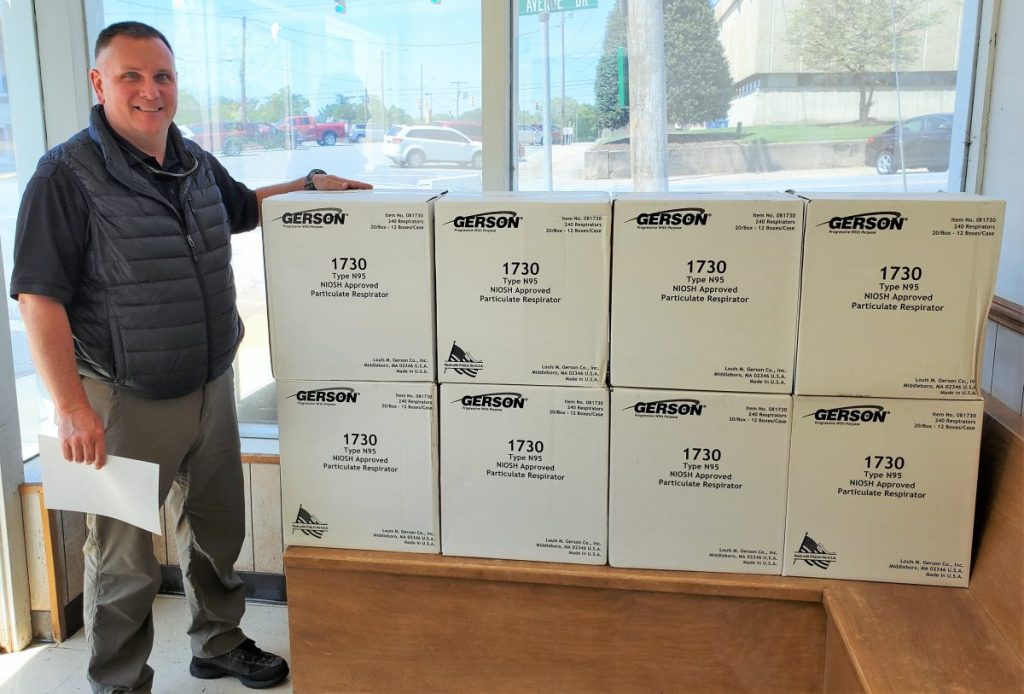 Mark Howell of the Alexander County Emergency Management office is shown with the N95 respirators donated by Shurtape.

He also said that response has been great since the county issued a call for organizations to hold food drives for local food pantries.

Ryan Mayberry, Chairman of the Alexander County Board of Commissioners, said he is thankful for the efforts of county staff and citizens.

“We have all been taking this very seriously and have taken appropriate precautions. Everyone seems to be doing a good job,” Mayberry stated. “We don’t have the authority to reopen Alexander County. When restrictions ease, I’d like to see us open in stages. This is a long way from being over.”

Mayberry said he believes that counties should be involved in the decision-making process.

“We know what’s happening in Alexander County better than they do in Raleigh,” he said.

Rick French, County Manager, said the county government is planning to bring more staff back to work within the next week, including maintenance, recreation, and other departments. He said that Rocky Face Park could be reopened to allow people to hike and exercise, but there would be restrictions, such as closing the playground, bathrooms, and picnic areas. No decision has been made yet.

County Manager French said the current water line extension project should be complete by early September, and the county could utilize the services of Buckeye Bridge for the proposed extension project with no mobilization expenses since they are already working in the county. No tax dollars would be used for the project, which will be funded with water revenues. The project will serve 50+ homes as well as agriculture purposes, and creates the potential for future development.

• Commissioners approved the low bid from Locke-Lane Construction of Stony Point for the Stony Point Elementary School Wastewater Project, which totals $644,710.57. The project is being funded by a CDBG-I (Community Development Block Grant for Infrastructure) grant from the State Water Infrastructure Authority and Alexander County Government.
The scope of the project includes: constructing a pump station (with standby power), and installing approximately 2,900 linear feet of 4” force main, 600 linear feet of gravity sewer to connect the school to the new line, and abandoning the two existing septic systems to allow Stony Point Elementary School to function at a more efficient level.

• Commissioners approved a Capital Project Budget Ordinance to fund $175,000 in improvements at Dusty Ridge Access Area and Wittenburg Access Area. The county recently entered into a 40-year lease with Duke Energy on the two parks. The allocated funds will be used for design and preliminary construction of hiking trails, soccer fields, and more. Duke Energy will also develop park amenities.

• The proposed 2020-2021 county budget is scheduled to be presented to commissioners at the May 4th meeting, with adoption tentatively planned for the June 1st meeting.

The Alexander County Board of Commissioners typically meets on the first Monday of each month at 6:00 p.m. in room #103 at the CVCC Alexander Center for Education. The next meeting is Monday, May 4, which will be conducted online via Zoom, with live audio on WACB 860 AM and www.860wacb.com. Meetings are recorded, and can be viewed on the county’s Government Channel on Spectrum channel 192 or on the county’s YouTube channel at www.youtube.com/alexandercountync. Meeting agendas, minutes, videos, and more are available on the county’s website at www.alexandercountync.gov/commissioners.