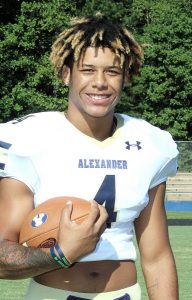 By D.N. PENNELL, Jr.
After fielding nearly 30 offers since January, rising ACHS senior Ryheem Craig announced his college commitment on Thursday, May 13, when he revealed that he would be attending the University of Louisville after high school.
The three-star defensive end emerged as a defensive leader for ACHS last fall with a team-high 89 total tackles and 21.5 tackles for loss. He earned All-Conference honors and was voted All-State by one website. Following a busy recruitment period and countless text messages, phone calls, and ZOOM meetings, Craig has decided to play for Coach Scott Satterfield and the Cardinals beginning in 2021. Satterfield led the Cardinals to an 8-5 record in his first season in Louisville last fall. He came to Louisville from Appalachian State where he was a star quarterback, offensive coordinator, and eventual head coach.
“We are so proud of Ryheem and thankful for all the attention he is garnering from college coaches. He knows he must continue to get it done in the classroom and on the field to make his dream of playing at the next level a reality. Our program is so very thankful to all the schools that have offered scholarships, stopped by to visit, and shown interest in recruiting our players. We are extremely excited about what the future holds for Ryheem and all our student-athletes as they grow into young adults.”
When asked what Louisville fans could expect from him in a social media interview Thursday, the 6’4, 220-pound Craig responded, “They can expect to get a player that’s motor is always on go. Even if the ball is 50 yards away, I am going to run to the ball every down. I want to be the ACC Rookie of the Year.”
” I just wanna thank God for everything that I’ve accomplished in life and for every school that has believed in me.  The University of Louisville is home,” Craig added.