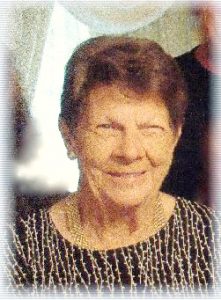 Nora “Jeanette” Yow Sigmon, of Bethlehem, went home to be with her Lord unexpectedly on Saturday, May 30, 2020 at her home.

Jeanette was born March 20, 1932, in Davidson County, to Fletcher Wade and Nora ‘Viola’ Mays Yow. She was a faithful member of Bethlehem Baptist Church for 70 years, and for most of those years was a Sunday School teacher. “Grandma Sigmon” always had time for her children, grandchildren, and great-grandchildren, and loved being involved with them.

Her “girls” she led in Girls Auxiliary (GA’s) always held a special place in her heart and she enjoyed hearing from or about them and their families. She loved her Sunday School class and the Salt Shakers, especially playing the bells.

Honorary pallbearers: Her Sunday School class and the Salt Shakers.

The funeral will be at Bethlehem Baptist Church on Friday, June 5, 2020 at 3:00 p.m. Burial will follow in the church cemetery.

The family requests that, in lieu of flowers, memorials be made to Bethlehem Baptist Church, Building Fund, 7500 NC Hwy. 127, Taylorsville, NC 28681.