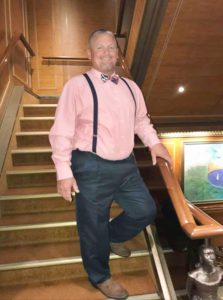 Scott Edward Starnes, 49, of Claremont, passed away Wednesday, June 3, 2020 at Carolinas ContinueCARE Hospital at Pineville.
Born October 9, 1970, he was the son of Linda Baker Piercy and husband Jerry, and the late Wayne Edward Starnes.
In addition to his mother, significant other Misty Boston of the home; six sons, Joshua Starnes of Conover, Cody Ayers of Lenoir, Jordan Starnes of Claremont, Garrett Hubbard and wife Taylor of Jacksonville, Jacob Starnes of Claremont, and Brady Boston of Claremont; a sister, Farrah Hefner and husband Mark of Bethlehem; two step-sisters, Kendra Burnette of Granite Falls, and Jodie Yount of Hudson; step-brother, Thomas Piercy of Granite Falls; four grandchildren, Leilah, Leland, Maverick, and Oakley (pop pop’s boy); a granddaughter on the way; grandmother, Marie Starnes; and numerous aunts and uncles survive him.
His father, Wayne Edward Starnes, preceded him in death.
Scott was a 20 year employee of the Hickory Daily Record. While serving as district manager, he made friends with many of his carriers. He also enjoyed helping his step-dad, Jerry, with his HVAC business.
Scott was a coach for the 12U WCW Warriors Elite travel team out of Lenoir. He loved this group of young men dearly. Scott was loved and respected by his fellow coaches, ball players, and parents.
Scott was also an avid softball player. He played for numerous teams over the years. His teammates were like his brothers. One of his favorite events was the yearly Palmetto Softball Tournament.
Sports were important in Scott and Misty’s house. He was a die hard Washington Redskins and New York Yankees fan through the good and bad years! Earning him some nights on the couch, he was also a UNC Tar Heels fan.
Scott was a hard working, kind, generous man who never met a stranger. He loved to travel and make memories with his family.
Scott was a loved and devoted son, brother, Pop Pop, father, friend, and fiancé.
The family would ask if you played ball with or against Scott to wear your jerseys to services. Also, if you have a #StarnesStrong shirt, the family would love you to join them in wearing them at the service.
The funeral will be 4:00 p.m., Tuesday, June 9, 2020 at Jenkins Funeral Home Chapel with Rev. Michael C. Stone officiating. The family will receive friends from 5:00 p.m. – 7:00 p.m., Monday, June 8, 2020 at Celebration Center of Jenkins Funeral Home.
Memorials may be made to the WCW Warriors 12 year old travel fund, Attn: Gary Hamby, 109 Cliffwood Drive, Hudson, NC 28638.
Please sign the online guestbook at www.jenkinsfuneralhome.net.
The Starnes Family has entrusted arrangements to Jenkins Funeral Home and Cremation Service in Newton.