On Friday, June 5, Taylorsville Times Sports Editor Donny Pennell presented the 22nd Annual Taylorsvilletimes.Com Athletes of the Year Awards in an online announcement.
Four Cougar Seniors were recognized as the 2019-2020 award winners. Kaylin Dyson and Lanie Hammer were announced as the Co-Female Athletes of the Year, while the Co-Male Athletes of the Year Award winners are Logan Ellis and Steven Montgomery.
Athlete of the Year nominees are submitted by ACHS Varsity Coaches. The overall winners are selected based on votes by the Cougar Coaches, an internet vote, and a vote by the Times’ Staff.
This month, more than 12,000 Taylorsville Times readers cast votes online.
The nominees this year included: Dyson, Hammer, Ellis, Montgomery, Savanna Bowen, Camella Church, Paige Coonse, Mady Thomas, Maddox Kerley, Jem Lowrance, Dalton Stikeleather, Zach Wooten, and Colston Yount.
KAYLIN DYSON 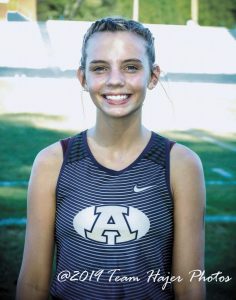 Kaylin Dyson is a standout member of the ACHS Cross Country and Track & Field squads. She was an All-Conference performer in Cross Country last fall.

Kaylin is the daughter of Kendra and Danny Dyson and she plans to attend Lenoir-Rhyne University after high school.
“Kaylin has been a joy to coach the past few years. She has dedicated herself to her craft of distance running- She has for the past 2 seasons been our fastest 800m runner – and greatly improving off of her freshman and sophomore years. She was All-Conference last year in the 4x800m, and qualified for regional in the 4×800 as well. She also was All-Conference in Cross Country,” ACHS Track and Field Coach Jonathan Winkler commented.

LANIE HAMMER
Lanie Hammer has excelled in basketball and track & field during her high school career. This past season, Hammer was the starting point guard for the Lady Cougar Basketball Team. She earned All-Conference honors despite missing a portion of the season due to injury.
The daughter of Stacie and Scott Hammer, Lanie plans to attend Lenoir-Rhyne University where she will play 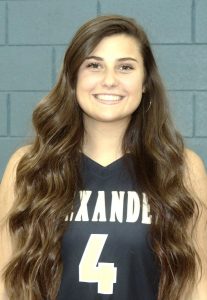 basketball.
“Lanie Hammer is definitely the type of player any coach would love to have on their team. Her motto is Team First. Toughness and 100% effort are what she gives in every game. Lanie injured her ankle in game three of the season and played through pain the rest of the season without complaining or making excuses. In spite of her injury, Lanie averaged six assists per game and made All-Conference. She is a talented athlete with a great attitude,” Alexander Central Women’s Basketball Coach Jon Presnell commented.

LOGAN ELLIS
Logan Ellis will graduate from ACHS as one of the school’s top distance runners ever. He earned All-NWC honors in track and cross country and qualified for the Cross Country State Championship two times.
Logan will be attending Lenoir-Rhyne University where he will be a member of the Cross C 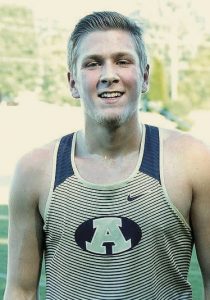 ountry and Track & Field programs.
He is the son of Michele and Greg Foster.
Alexander Central Cross Country Coach Joe Cornwell commented, “Logan Ellis is a wonderful young man, who is not only a hard worker but a very responsible individual. He takes a lot of pride in everything he does. Logan has already learned that his actions are what represents him as a man. I have really enjoyed coaching him over the last 4 years and look forward to seeing what he does in college and in life.”

STEVEN MONTGOMERY
Steven Montgomery is the son of Melissa Summers and Steven Montgomery. He participated in three sports at the school, including football, cheerleading, and track & field.
Last fall, Montgomery set a school record for rushing yards in a single season with 1,950 yards on the ground. He earned All-NWC 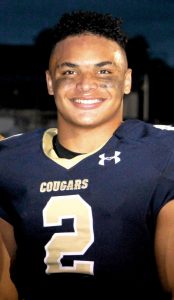 honors for his efforts. Steven has been selected for the East/West All-Star Game and is undecided on his post-high school plans.

“I have had the pleasure of coaching Steven Montgomery in Football for four years. Steven started for us as a sophomore on Varsity and made a huge contribution immediately. Stephen’s athletic ability has had a major impact on this program’s success over the last four years. I can honestly say that Steven is one of the most explosive and dynamic athletes that I have ever coached. Steven has also been one of our strongest players on and off the field; he has set several records in our strength program and excelled in the classroom. Steven Montgomery is an outstanding example of a student-athlete. I am very excited to follow his career as a student and athlete at the collegiate level,” ACHS Football Coach Butch  Carter quipped.