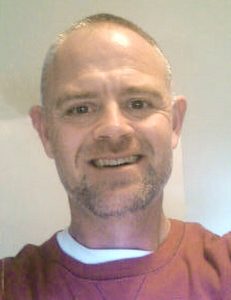 Larry “Dave” Martin, 48, of Mocksville, went to his heavenly home on Sunday, June 21, 2020, surrounded by family, after a courageous battle with brain cancer.

He was born November 29, 1971, in Alexander County, the son of Sandra Martin Holbrook and the late Walter “W.L.” Holbrook.

He had worked for United Medical Systems in his earlier years, and then later had owned and operated D & P Custom Woodworking in Mocksville. He was a member of CountrySide Baptist Church in Statesville. He was an avid hunter and fisherman and loved his family dearly.

Including his father, he was preceded in death by his grandmother, Lula Barker.

Those left to cherish and honor his memory include his wife, Pamela Fox Martin; his daughter, Micah Martin of Hiddenite; his son, Hunter Martin of Hiddenite; his step-daughter, Kaitlyn Upadhaya of Mocksville; his step-son, Kevin Upadhaya of Carrboro; his brothers, Jeff Martin and Walter Holbrook; and a number of nieces, nephews, cousins, and friends.

The family will receive friends from 1:30-2:45 p.m., Wednesday, June 24, 2020 at Monticello Baptist Church with the funeral service to follow at 3 p.m. in the church. Dr. James Smith and Rev. Bobby Henderson will officiate. Burial will follow in the CountrySide Baptist Church Cemetery. The family requests that everyone follow state mandate for COVID-19, masks will be available but not required.

Adams Funeral Home and Cremation Services is honored to be serving the Martin Family.