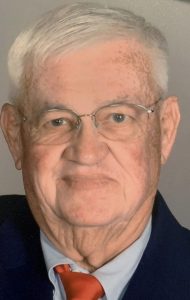 He was born in Sumter, South Carolina to the late Cyril Hammer Sr. and Ethel Evans Hammer. He retired from the State of North Carolina Alcohol Law Enforcement Agency in 1985 after serving 12 years. Mr. Hammer also served as Maiden Police Chief in the early 70’s and was a third generation member of the Hickory Masonic Lodge and The Oasis Shriners.

In his early years, Cyril was a member of the Hickory Car Club and enjoyed showing his ‘63 Studebaker Lark Convertible. He was also a pilot and a member of the Civil Air Patrol in Statesville.

In addition to collecting coins and old money, he enjoyed spending time with his family. He took his girls on many adventures and never traveled to another city where he didn’t find someone that he knew or made a new friend to talk to. His career in law enforcement led him to spend his golden years supporting his church on their security team and serving people in need through the church’s Sabbath Soup Kitchen.

Survivors include his high school sweetheart and wife of 57 years, Paula Cooke Hammer of the home, two daughters, Lori H. Sykes and husband Gerald of Winston Salem, and Amy H. Scronce and husband Tracy of Newton. He was the proud grandfather of three grandsons, Jordan Sykes of Atlanta, Georgia, Austin Sykes of Charlotte, and Tyler Scronce of Newton. He is also survived by his brother, Jerry L. Hammer and wife Betty, two nieces, two grand-nephews, and a brother-in-law, Ronald Cooke of Hickory.

Due to Covid-19, a private family Celebration of Life service is being planned.

Burke Mortuary & Crematory in Newton is serving the Hammer Family.