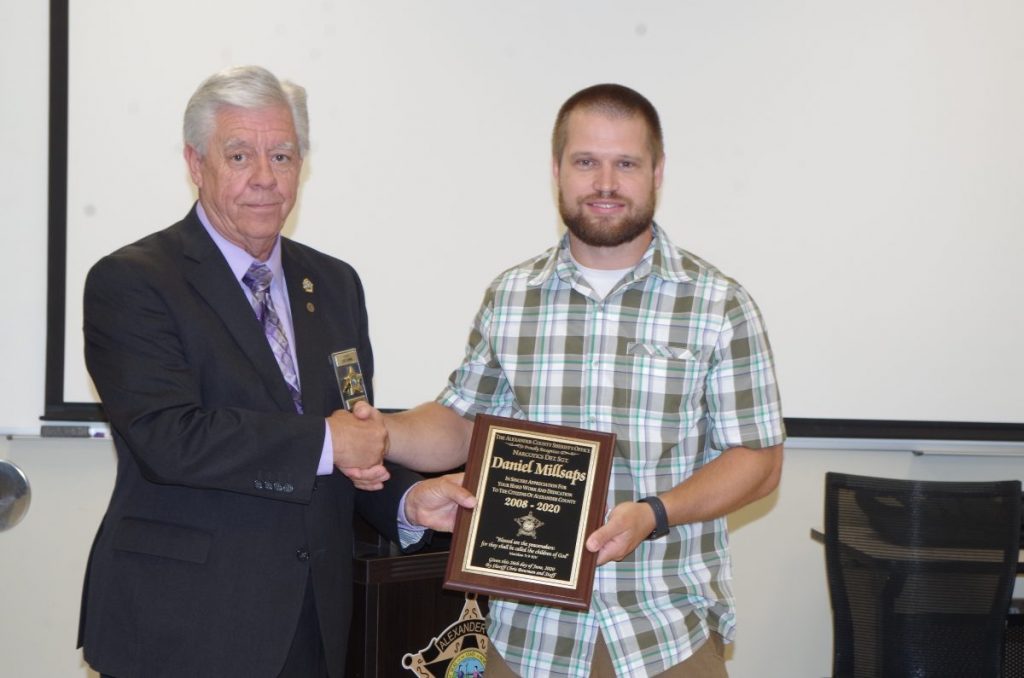 PLAQUE PRESENTED — Detective Daniel Millsaps (right) was presented a plaque for his 12 years of service to the Alexander County Sheriff’s Office on June 27, by Sheriff Chris Bowman (left). Millsaps is leaving the agency to enter the N.C. State Bureau of Investigation Academy.

Alexander County Sheriff’s Office Detective Daniel Millsaps, age 33 of Taylorsville, was honored Friday, June 26, with a ceremony honoring his 12 years of service to the agency. Millsaps is leaving to take a position with the North Carolina State Bureau of Investigation.

Daniel was hired in January 2008 by former Sheriff Hayden Bentley as a sworn, part-time officer. He was hired full-time the following month. In 2011, Daniel began working Narcotics as a deputy. He came to the Investigations Division for training in June 2012, and was promoted to Detective in October 2012.

He received his Bachelor’s Degree in Criminal Justice from Western Carolina University in 2012.

In November 2018, Daniel became a sworn Homeland Security Task Force Member. He has been a member and operator with the Sheriff’s Office Special Response Team.

Daniel is the son of 32-year veteran Deputy Danny Millsaps and wife, Donna. Daniel and his wife, Katelyn, have one son, Rhett.

Notably moved by the moment, Daniel said he wished to thank the Sheriffs he has served under for their leadership and his training officers and fellow deputies for their guidance. He stated he was amazed at the amount of narcotics taken off the street with the help of fellow officers.

Captain Chad Pennell told Daniel, “You will be missed. When you come, you’re family, and when you leave, you’re still family.”