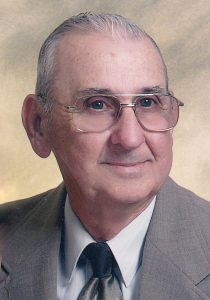 Harry Robert Johnson, 85, of Taylorsville, went to his heavenly home, surrounded by his family, on Saturday, July 4, 2020 at his residence.

Born on May 11, 1935, in Alexander County, the son of the late Arthur and Dolly Johnson, Harry was retired from Broyhill Furniture where he worked in the shipping department for 38 years. He was a faithful member at East Taylorsville Baptist Church, attending the Auditorium Sunday School class. Harry was also a NASCAR fan and enjoyed going to Gatlinburg. He was a loving husband, father, grandfather, brother, and friend to many. Harry will truly be missed but will forever be in our hearts.

Along with his parents, he was preceded in death by two infant daughters; brothers, Frank and Sam Johnson; and sisters, Christine Hollar, Margaret Holsclaw, Dorothy Caldwell, and Millie Johnson.

Those left to cherish his memory include his wife of almost 59 years, Geraldine Russell Johnson; daughter, Sharon George and husband Anthony; grandson, Paul Tyler George; brother, Ross Johnson and wife Lorene; sister-in-law, Sue Johnson; along with many nieces and nephews.

Memorials may be made to the local American Cancer Society c/o Kendra Dyson at 57 Kendra Lane, Taylorsville, NC 28681.

The family would like to say a special thank you to Carolina Caring, Carolina Oncology, and the caregivers that came out to the home during this time to help take care of Harry. We truly appreciate you all.