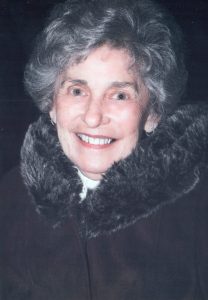 Dorothy L. Warta, 95, of Taylorsville, passed away on Monday, July 13, 2020 at Gordon Hospice House in Statesville.

Dorothy was born in December 1924, in New York, the daughter of the late Joseph John Waldeck and Ernestine Esther Lowry Waldeck.

She was a homemaker and also worked as a bank teller. She was a member of Mt. Pisgah Lutheran Church in Bethlehem. She enjoyed various types of needlework. She also enjoyed cooking and baking for her friends and family. Dorothy loved her family dearly, and loved to travel across the country in their motor-home with her husband.

Including her parents, she was preceded in death by her husband, Dr. Clarence E. Warta, and her brother, Herbert Waldeck.

A Celebration of Life service will be held at 4 p.m., Wednesday, July 22, 2020 at Mt. Pisgah Lutheran Church. Rev. Mike Stone and Rev. Aaron Stroud will officiate. Inurnment will be in the church columbarium at a later date.

Memorials may be made to: Gordon Hospice House, 2341 Simonton Road, Statesville, NC 28625; or to The Salvation Army.

Adams Funeral Home and Cremation Services is honored to be serving the Warta Family.