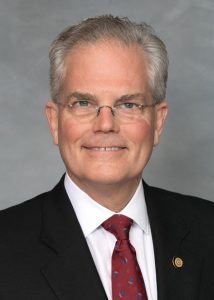 After three terms in the Senate and a term in the House, Sen. Andy Wells (R-Catawba, Alexander) announced on July 20 his retirement from the North Carolina General Assembly, effective July 27, according to a press release.

Sen. Wells, a real estate developer and manager, leaves a lasting imprint in the Senate for cutting regulatory red tape, reforming the state’s pension plan, and leading efforts to keep the state’s Unemployment Trust Fund solvent. Sen. Wells has been an advocate for simplifying and flattening the state’s tax code to create a fairer tax system. During his tenure, he worked to address the state’s $50 billion unfunded liability in the retirement system.

Wells served as the chairman of several committees, including Pensions and Retirement and Aging, Agriculture/Environment/Natural Resources, and the Joint Legislative Oversight Committee on Unemployment Insurance.

“Andy has been a dedicated and thoughtful member of the Senate. He has worked tirelessly to reform the state’s pension and retirement system, making sure that it remains solvent for years to come,” Senate Leader Phil Berger (R-Rockingham) said. “He has a knack for finding regulations that have burdened businesses and the citizens of North Carolina. His work to remove those burdens will have a lasting legacy on the state.”

In 2019, Sen. Wells worked to clean up the state’s criminal codes and require municipalities and counties to take stock of criminal penalties in their jurisdiction in an effort to remove unusual or outdated laws. One of Sen. Wells’ colleagues said the bill would be “the most important criminal justice reform bill of the year.”

“It has been an honor to serve the people of Alexander and Catawba counties for eight years,” Sen. Wells said. “While in the House and Senate I worked to take North Carolina’s tax climate from one of the highest in the region to one of the most competitive. That work has positioned North Carolina to be one of the best states to do business in. It has been fulfilling to see our efforts make a positive change in the lives of countless North Carolinians.”