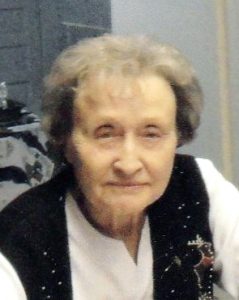 Kathryn Gay Stout, 90, of Taylorsville, passed away on Tuesday, July 21, 2020 at her home after a short illness.

She was the daughter of John Henry and Lydia Bell Denny of Elizabethton, Tennessee.

Her previous employment was in Atlanta, Georgia, before moving to Taylorsville in 1973. Her late husband, Edward Stout, retired from the City of Taylorsville as the Maintenance Supervisor after 12 years.

Including her parents, she was preceded in death by her husband, Edward Stout, and several siblings.

She was “Aunt Kat” to all, she enjoyed gardening, crocheting, hand crafts, and was an expert seamstress and tailor.

Those left to cherish and honor her memory include her sister, Myrtle Peaks of San Antonio, Texas; niece, Janet Scott; great-niece, Kimberly Thomas; and great-nephew, Darren Scott of Taylorsville.

The family would like to express a “Special Thank You” to Hospice of Alexander County for their loving care.

Donations may be made to Hospice of Alexander County in lieu of flowers.