Last month, a teen flame thrower with ties to Taylorsville had his dream of playing professional baseball become a reality when he was selected in the fourth round of the Major League Baseball Draft on June 10. 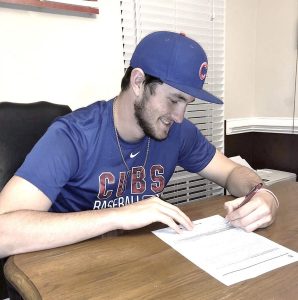 DRAFT PICK – Luke Little, who is the grandson of Donna and Art Tomblin of Taylorsville, was the fourth round pick of the Chicago Cubs in the 2020 draft.

Luke Little, who is the son of Billie and Ecford Little of Charlotte was the fourth-round selection of the Chicago Cubs in last month’s amateur draft. He was the 117th player taken in the MLB draft which was shorted to just five rounds due to the COVID 19 pandemic.
Little has close ties to the Alexander County community as he is the grandson of Donna and Art Tomblin of Taylorsville.
A graduate of East Mecklenburg High School in Charlotte, Little was playing his sophomore season at San Jacinto, a junior college in Pasadena, Texas, when the coronavirus pandemic spelled the end of his team’s campaign in March.
He returned to Charlotte in mid-March and was working out with plans to transfer to the University of South Carolina this coming fall.
However, all that changed with a video of Little’s May 8th workout surfaced on Twitter. In the video, the 6’8”, 225-pound southpaw is seen throwing a fastball that reached 105 miles per hour on a radar gun. With that pitch, Little was clocked with the second-fastest recorded pitch in history.
The fastest pitch ever recorded was 105.1 mph by then-Reds reliever Aroldis Chapman against the Padres in San Diego in 2010.
Little officially signed his first professional contract with the Chicago Cub Organization on June 25. He was promptly assigned to the AZL Cubs Blue Team for more training.