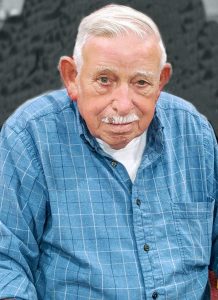 Born October 31, 1938, he was the son of Charlie Pete Chapman and Dorothy Lee Dennis Chapman. He worked at Hickory Plumbing and Heating for 45 years and served in the United States Army during the Korean War. After retirement, he worked at Ingold.

He is survived by his daughters, Michelle Bumgarner and husband Allen of Hickory, and Angela Hughes of Hickory; two sisters, Ellen Chapman and Louise Chapman, both of Taylorsville; a brother, Ronald Chapman and wife Beverly of Hickory; brother-in-law and special buddy, Jim Walker; two grandchildren, Dallas Hughes and Laney Bumgarner; a friend, Julia Stallings; and numerous nieces and nephews.

In addition to his parents, his spouse of 49 years, Nancy James Chapman; his brother, Bud Chapman; and his sister, Beatrice Pennell, preceded him in death.

A private graveside service will be held by the family at a later date. The family will receive friends at his daughter Michelle’s house.

Please sign the online guestbook at www.jenkinsfuneralhome.net. The Chapman Family has entrusted arrangements to Jenkins Funeral Home and Cremation Service in Newton.