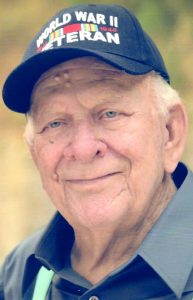 Al was born September 1, 1928, in Stickney, West Virginia, the son of the late Dell Miller and Stella Scarbro Oestrich.

He was a US Air Force veteran and attended Wayside Baptist Church. He was a life member of the DAV and also former commander. He had worked as a motor room engineer for 25 years. He loved to go traveling and listening to country music. Al also enjoyed gospel music, playing bingo, watching the Atlanta Braves baseball, and going to flea markets. In 1964, he ran for State Representative in Ohio and was also a member of the United Steel Workers of America.

Including his parents, he was preceded in death by an infant sister and his brother, Delmer Miller.

Those left to cherish and honor his memory include his wife, Thelma Marie Dickens Miller of the home; his daughters, Sabrina Hamlet and husband James of Connolly Springs, and Jennifer Miller Gilbert of the home; his sons, Michael Keith Miller and wife Dena of Taylorsville, and Rick Dean Miller and wife Ann of California; his brothers, Dallas Miller of Chicago, and Tracy Miller of Tennessee; five grandchildren; and five great-grandchildren.

Adams Funeral Home and Cremation Services is honored to be serving the Miller Family.