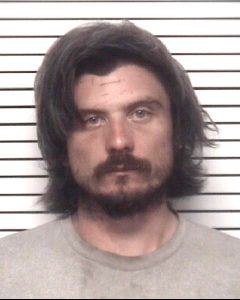 On the evening of Monday, August 3, 2020, at approximately 8:30 PM, the Alexander County Sheriff’s Office was contacted by Troutman Police Department in reference to the vehicle that was reported stolen from Office Practice of Pharmacy on Sunday August 2, 2020.

The vehicle was located by Troutman Police Department at a truck stop within their jurisdiction. Troutman Police Department arrested Jordan Michael Fisher, W/M, age 30 of Lenoir for Felony Possession of a Stolen Motor Vehicle. Fisher was also served with an outstanding Order for Arrest from Burke County. Alexander County Sheriff’s Office detectives responded to Troutman, NC, where they interviewed Fisher.

After further investigation, warrants were issued for Fisher’s arrest. The charges are as follows: Felony Larceny of a Motor Vehicle, Misdemeanor Larceny, and Injury to Personal Property. As of August 4, Fisher was in the custody of Iredell County Sheriff’s Office, where these warrants were served.