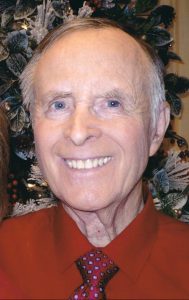 He was born June 21, 1942, in Alexander County, the son of the late Donald L. Kerley and Hazel W. Kerley of Hiddenite.

Fulfilling a life-long dream of teaching mathematics, he began his teaching career as Instructor at LeTourneau College, Longview, Texas (1965-1967) and became a Professor of Mathematics at East Tennessee State University (1967-2008), where he taught courses in numerical analysis, introduction to analysis, statistics, and calculus in the Department of Mathematics. His research specialty was real analysis, and he published extensively in mathematics and computer science. In addition to teaching at ETSU, he served as assistant to the department chairman.

After retirement, he continued teaching as adjunct faculty in the Department of Mathematics and Computer Science at Lenoir Rhyne University (2008-2012). He was a member of the American Math Society and a member of the Mathematical Association of America, serving one term as Tennessee State Director. He was loved and respected by students, his colleagues in the Department of Mathematics, and his family and friends.

Dr. Kerley was a member of Pilgrim Baptist Church, Hiddenite, and a former member of First Baptist Church, Jonesborough, Tennessee, where he served as a deacon, Sunday School Director, and Sunday school teacher. He loved his family and friends. He traveled to Europe, Hawaii, and many states in the US. He especially enjoyed his high school classmates and reminiscing about people and places.

In addition to his parents, he was preceded in death by a young brother, Wendell Kerley; sister, Phyllis K. Patterson; brother, Buford D. Kerley; and brother-in-law, Dewhitt Patterson.

Dr. Kerley is survived by his wife of 56 years, Linda Johnson Kerley of the home; two sons, Christopher S. Kerley of Church Hill, Tennessee, and Michael D. Kerley and wife Emily of Greensboro; granddaughter, Caroline E. Kerley, and grandson, Everett P. Kerley of Greensboro; a sister, Coleen K. Hendren and husband Dave of Hiddenite; sister-in-law, Katherine Kerley of Statesville; and a number of nieces and nephews.

Funeral services will be held at 2 p.m., Wednesday, September 16, 2020 at Pilgram Baptist Church. Rev. Tom Lambert and Rev. Randy Campbell will officiate. Burial will follow in the church cemetery. The body will lie-in-state 30 minutes prior to the service at the church.

Adams Funeral Home and Cremation Services is honored to be serving the family of Dr. Lyndell M. Kerley.