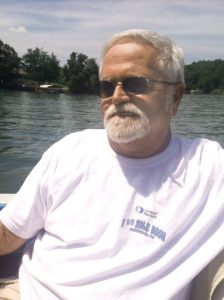 Rex Isaac Minton, Sr., born on August 3, 1954, went home to be with his Lord and Savior early Monday morning, September 14, 2020. Rex fought a courageous battle with lung disease and was comforted by family, nurses, and neighbors in his final days at home.

Rex was preceded in death by his parents, Isaac and Louise Minton, and a brother, Wade Minton.

Left to cherish his memories are his loving companion, Juanita Greene; his son, Rex Minton, Jr. and his wife Barbara.

He worked as a service manager for multiple Ford dealerships before going to work at KRG Utility until his retirement in 2016.

Rex was of the Baptist faith and blessed his friends with many acts of kindness and love. Some of his family’s fondest memories include their times together at the lake. Rex was their humble captain and had a great love for the water. He told many good stories, and he played a starring role in some of those wild tales of old.

Juanita remembers the love and laughter that they shared throughout the years. Rex also had a special relationship with Juanita’s sons, Marty and Jeff. He was a loving Gramps to Juanita’s grandsons, Jacob, Eli, and Noah.

A celebration of life will be held at Sunrise Baptist Church, 2643 Mission Road, Hudson, NC on Thursday, September 17, at 2:00 p.m.

In lieu of flowers, the family requests that memorial contributions be made to Carolina Caring Hospice at 3975 Robinson Road, Newton, NC 28658.

Online condolences may be left with evansfuneralservice.com.