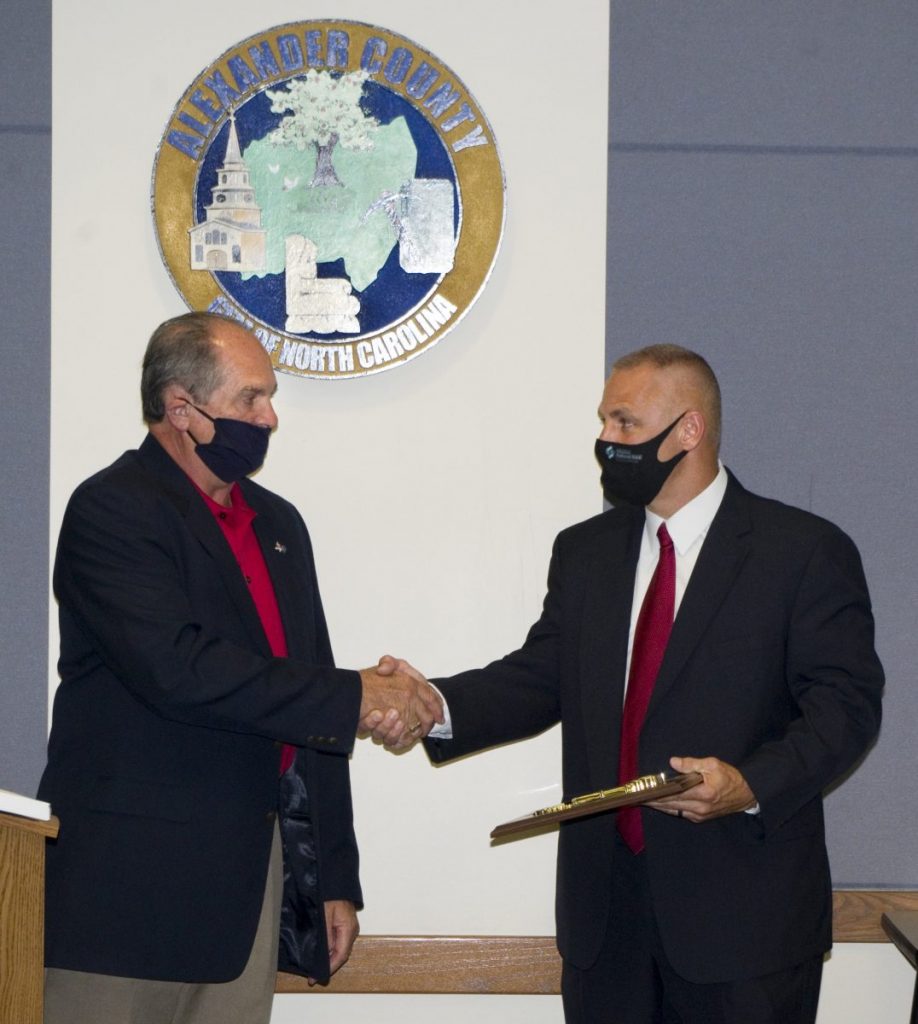 Bob Jessup, Attorney with Sanford Holshouser Law Group, is assisting the county with the refinancing process, which could save the county $145,000 in interest expense. Jessup said Truist Bank has agreed to a 1.10 percent interest rate on the $3,396,000 in existing debt.

The original loan for the law enforcement and detention center was approximately $8.5 million with an interest rate of 3.19 percent for 15 years.

To refinance the debt, the county must gain approval of the Local Government Commission (LGC); therefore, commissioners approved a resolution to submit an application to the LGC for approval of the financing agreement.

Pending LGC approval, Jessup said commissioners could approve the financial documents at their October meeting, with the loan closing by the end of October.

In other county news:

• Commissioners approved the 2020-2021 planning services contract between Alexander County and the Town of Taylorsville. North Carolina General Statutes Chapter 160D legislates historic preservation with planning and zoning provisions; therefore, the county’s Historic Preservation Committee requests historic preservation be included in the planning services agreement with the town. Without the planning services contract with the town, the committee is unable to conduct preservation activity within the town limits. Commissioners also approved revisions to the Historic Preservation Committee’s Design Standards, which will bring the local document into compliance with recent changes made to the NC General Statutes.

• Leeanne Whisnant, Consolidated Human Services Director, presented a local COVID-19 update. At the meeting, she provided the latest figures from the health department, which reported the fourth death associated with the virus. Whisnant said the death occurred several weeks ago, but they had to wait for medical confirmation. She said the county has a total of 452 confirmed cases, with 58 people in quarantine, three people in the hospital, and 387 people who have recovered.

She said there has been some confusion as the North Carolina Department of Health and Human Services’ (NCDHHS) COVID-19 dashboard hasn’t been reporting the same number of cases as the health department. At the time of the meeting, the state was reporting 473 cases in Alexander County, but Whisnant said the number includes some duplication and some cases who are not residents of the county. The health department has been in contact with NCDHHS to correct the numbers.

Whisnant said the school system’s reopening has gone well with no outbreaks or clusters of COVID-19. She said there have been some confirmed cases in students and staff, but the numbers have been low as everyone is wearing masks, washing hands, and maintaining social distance as much as possible.

“The school system should be commended,” Whisnant stated. “Our teachers and students are doing an excellent job.”

She said the health department continues to conduct drive-thru testing on Mondays, Wednesdays, and Fridays, and other days if needed, with an average of 15 tests on those days.
Whisnant said flu season is nearing, and she encourages everyone to get the flu vaccination. It was noted that the vaccine demand will be higher this year, so citizens should plan ahead and get their shot early.

Whisnant said the county has done an excellent job of “flattening the curve,” as the local trend is down to numbers that were being experienced in May. Currently, she said that less than 2 percent of those tested are positive cases.

Doug Gillispie, Director of Public Services, said several EMS employees have had to self-isolate due to exposure to someone in their household who tested positive for the virus. With those employees out, he is having to use more part-time personnel. In terms of PPE (personal protective equipment), Gillispie said the county’s supplies are adequate except for medical gowns.

• Commissioners presented a “Key to the County” to Captain Chad Pennell, who recently retired from the Alexander County Sheriff’s Office after 27 years of service. Pennell began his career in March 1993 as a part-time school resource office, became a full-time deputy in 1994, and worked his way through the ranks. Commissioners commended Pennell for his dedication to the job, the county, and the citizens, as well as for his professionalism.

• Alexander County EMS was recognized by commissioners for earning the American Heart Association’s Mission: Lifeline® EMS Gold Plus Award for implementing quality improvement measures for the treatment of patients who experience severe heart attacks. Every year, more than 250,000 people experience an ST-elevation myocardial infarction (STEMI), which is the deadliest type of heart attack caused by a blockage of blood flow to the heart that requires timely treatment.

• Benjie Thomas of West Consultants presented an update on the Stony Point Elementary School wastewater project. The contractor, Lock-Lane Construction of Stony Point, was given the notice to proceed on May 11 and has a deadline of November 7 for substantial completion. To date, the contractor has installed approximately 1,650 linear feet of four-inch force main. Most of the work at the school has been completed except for tying in services and abandoning the failing septic system. Thomas said that gravity sewer has been bored under Hwy. 90 and the railroad. Total project cost is $640,569.57, which is funded by a CDBG-I (Community Development Block Grant for Infrastructure) grant from the State Water Infrastructure Authority and Alexander County Government. He said that although it has been a wet summer, the project is on schedule.

• During the public comment portion, Alexander resident Kris Knowlton, a veteran, strongly expressed his concern with the County’s Special Events Ordinance, which he said possibly violates one’s Constitutional rights to peaceably assemble. He also took exception to the ordinance’s clause that county officials can inquire as to the nature or content of speeches to be held at public events, although it is “impermissible” to deny an event application based on the content or purpose of the event.

Board Clerk Jamie Starnes read aloud a letter of public comment from local resident Craig McCloud, who wished to inquire about the status of complaints he has lodged a month ago against his neighbors on Ridley Ranch Road for trash ordinance violations and blocking the roadway.

As is their policy, the board took these comments under advisement and did not respond to them during the meeting.

• Commissioners approved a resolution authorizing a grant to the Alexander Rescue Squad and the county’s eight volunteer fire departments. Each department will receive a one-time grant of $2,000 to provide financial assistance to help offset additional costs of operation incurred as a result of their response to COVID-19.

• Commissioners approved an interlocal agreement between the county and the Town of Taylorsville for the disbursement of CARES Act revenues. Alexander County received $1,587,828 in CARES Act funding. Of that amount, $396,957 is being allocated to the town.

• Commissioners reported on their participation in a ribbon cutting at Appalachian Storage of Bethlehem. They also attended a building dedication at which Hospice of Alexander County dedicated its building to the late Nita Wagoner, who was the first director of Hospice in Alexander County.

The Alexander County Board of Commissioners hold a Consolidated Human Services Board meeting every other month following their regular meeting.

Billie Walker, Assistant Health Director, presented the 2019-2020 Communicable Disease Update. For the fiscal year, COVID-19 comprised 32 percent of communicable diseases in Alexander County, followed by Hepatitis C at 21 percent, and Salmonellosis at 4 percent. For sexually transmitted diseases (STDs), Chlamydia was most prevalent at 24 percent followed by Gonorrhea at 14 percent; however, Walker said the county has seen a significant decline in STDs over the past few years. During 2019-2020, the county had one case of pertussis, one case of Haemophilus influenzae, and one flu death. In general, gastrointestinal sickness was the most frequent malady.

Linda Clements, Assistant Director of Social Services, presented annual DSS highlights and program review for 2019-2020. She said the year started with the consolidation of DSS, health department, and senior center under one director. She displayed photos of the renovated lobby area at DSS with a fresh layout and new paint. DSS also added automatic doors and an outside drop box for convenience. In addition, DSS has a new laundry room with a shower and new visitation rooms for family meetings. Clements said the well-being of Alexander County citizens is their priority, with programs in place to provide for their health, economic situation, and protection.

The Alexander County Board of Commissioners typically meets on the first Monday of each month at 6:00 p.m. in room #103 at the CVCC Alexander Center for Education; however, the next meeting is set for Monday, October 12 at 6:00 p.m. Regular meetings are recorded, and can be viewed on the county’s Government Channel on Spectrum channel 192 or on the county’s YouTube channel at www.youtube.com/alexandercountync. Meeting agendas, minutes, videos, and more are available on the county’s website at www.alexandercountync.gov/commissioners.