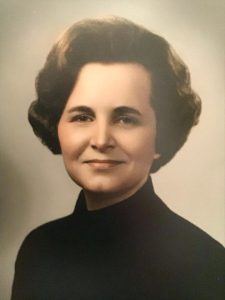 Doris Rector Watts, 83, of Taylorsville, passed away on Thursday, September 24, 2020 at her home with her loving children by her side.

Born March 15, 1937, in Alexander County, to Harold Franklin Rector and Annie Mae Sherrill Rector, Doris was preceded in death by her parents, her beloved husband, Glenn Albert Watts, and her brother, Hayden Rector.

For the people who knew and loved Doris, any number of words might come to mind to describe her. Love, laughter, family, and fellowship are but a few.

Doris found great enjoyment in sporting events as both a fan and a participant. In her youth, she was very active in sports, having been named All-State in Basketball as a guard. Doris was also known to possess an underhand softball pitch described by her coach as “mean and fast,” leading him to tell her if she had been a boy, she could have been a college pitcher!

The love and fellowship she had with her classmates continued throughout her life. Her high school class routinely met on the second Saturday of every month and Doris was a regular attendee at these gatherings.

Love for her family ran deep as well. She first met her future husband, Glenn, at the age of 13 at People’s Drug Store and made quite an impression on him. So much so that he told her she was too young at the time, but was worth waiting for and that he would wait until she was 18 and then come calling. True to his word, that is exactly what Glenn did, and together they built a family and shared a happy home with their two children.

While Doris’s career was that of homemaker, she also gave back to her community in a variety of ways. She taught Kindergarten, was a substitute teacher for the Alexander County Schools, was a life-long member of First Baptist Church in Taylorsville, and loved her Sunday School Class. She also believed in providing assistance to those in need. Social activities with her friends gave her great joy and welcoming family and friends to gather in her home for food and fellowship was a common theme throughout her lifetime.

A graveside service will be held at 1 p.m., Saturday, September 26, 2020 at Taylorsville City Cemetery. Rev. Dan Redding will officiate. The body will lie-in-state at Adams Funeral Home for the public to view and sign the book from 9 a.m. until Noon, Saturday, September 26, 2020. The family will receive friends at the home and following the funeral.

The family would like to express a special thanks to life-long friend, Kay Barron; caretaker, Quiana Howell; special helper and friend, Paulino (Kim) Arias; and neighbors, Jim and Kim Brown, and their children, Mattie and Stewart.

Adams Funeral Home and Cremation Services is honored to be serving the Watts Family.