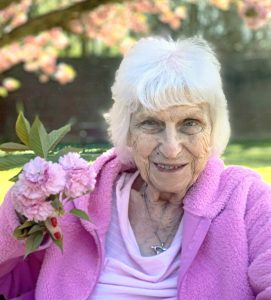 A memorial service for Patricia will be conducted at Alexander Funeral Service on Monday, October 12, 2020 at 4:00 p.m. Rev. Gary Jennings will officiate.

Patricia was a member of Community Fellowship Church, served her community as a dietary technician in the health care industry, and will be long remembered for her enjoyment of singing and dancing.

Patricia was born to the late Reginald and Dorothy Weaver Jones of Oneida County, New York.

In addition to Patricia’s parents, she was preceded in death by her husband, Armand P. Sanservo, and a sister, Barbara Teague.

Those left to cherish the memories of Patricia include her son, David Sanservo and wife Carol of South Carolina; two brothers, Edward Payce of Colorado, and William Jones of Georgia; a niece, Tracey Mohon and husband Barry of Taylorsville; two nephews, Richard Teague of Taylorsville, and Thomas Teague and wife Peggy of California; grandson, Brett Sansevero and wife Breeze; and three grandchildren of Las Vegas, Nevada.

The family wishes to express a sincere thank you to the staff at Valley Nursing Center.

The family requests that, in lieu of flowers, donations be made to Valley Nursing & Rehabilitation Center @ 581 NC Hwy 16 South, Taylorsville, NC 28681.