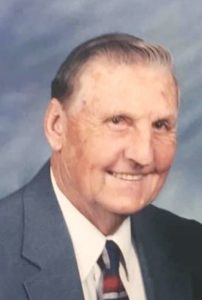 Kenneth Thompson Patterson, 94, of Taylorsville, passed away peacefully at home, surrounded by his family, on Wednesday evening, October 7, 2020.

Mr. Patterson was born on December 3, 1925, in Alexander County, to the late Arthur Quintis and Vanona Crouch Patterson. Kenneth was Director of the Alexander County Agriculture Extension Service until his retirement, having served for 30 years.

A veteran of WW II, serving in the United States Navy, he was an active member of First Baptist Church, Taylorsville, where he had served in numerous capacities, among which he was a Sunday school teacher and served as deacon. He was a model of a Man of God, both in the community and his family.

The annual family Beach Trip was the highlight of the summer. He was a master gardener and accomplished handyman. He loved to play golf with a group of close friends.

In addition to his parents, he was preceded in death by three sisters, Alma Goble, Juanita Smith, and Francis Bunton; along with four brothers, James, Quentin, Willard and Fredrick Patterson.

The family wishes to thank Anna Pennell, Diane Livingston, Cathy Lackey, along with Hospice of Alexander County, and Kelsey Anderson with Hospice for their special care.

Services have been entrusted to Alexander Funeral and Cremation Service.