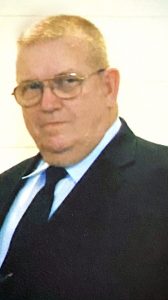 He was born July 21, 1943 to the late Roby G. and Nellie Harrington Branton of Alexander County.

A graveside service will be conducted at Pilgrim Baptist Church Cemetery on Wednesday October 14, 2020 at 2:00 p.m. Rev. Phil Branton and Rev. Arthur Duncan will officiate.

Kenneth worked 25 years at General Electric. After leaving General Electric, he began a career he truly enjoyed as a long-distance truck driver with his wife, Elaine. He spent many summers driving his mother (Nellie), and grandchildren, Mary Kirsty and Blake, around the United States. It truly was a family affair. In 2007, he received an award for driving a million miles accident free.

In addition to his parents, Kenneth was preceded in death by his brother, Ray Branton.

Those left to cherish and honor his memory include his wife of 58 years, Elaine Davis Branton; two sons, Kenny Branton and wife Tereasa, and Ronnie Branton; two grandchildren, Mary Kirsty Branton (Joe) of China Grove, and Blake Branton; a step-grandson, Zach Bailey of Hiddenite; a brother, Larry Branton (Libby) of Hiddenite; two brothers-in-law, Sam Davis (Alva) of Taylorsville, and Billy Davis (Judy) of Sugar Loaf; a sister-in-law, Mary Ann Icenhour of Wittenburg; along with a number of nieces, nephews, and great-nephews.

In lieu of flowers, the family asks that donations be made to Duke Cancer Institute at 20 Duke Medicine Circle, Durham, NC 27710.