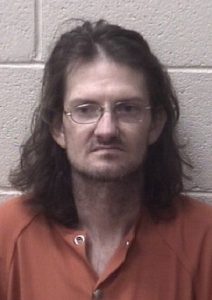 A Taylorsville man is in custody, accused of shooting and killing his mother.

According to Alexander County Sheriff Chris Bowman, on Wednesday, October 14, 2020, at approximately 8:47 AM, Alexander County 911 Communications received a call of a shooting that had occurred at a residence off of Harbert Mountain Road, on Mount Olive Church Road in the Sugar Loaf Community of Alexander County.  Officers responded to the residence, where they discovered a female victim suffering from multiple gunshot wounds to the upper torso and arm.  Information received was that the suspect had left the scene armed and in a vehicle.  A description was given to responding officers of a small gray hatchback vehicle. Officers located the vehicle en route to the scene at the intersection of NC Hwy 16 North and Mount Olive Church Rd.  Officers gave chase to the vehicle.  The vehicle refused to stop and headed back toward the scene of the shooting on Harbert Mountain Rd.  Officers pursued the vehicle until it came to a stop near the residence on Harbert Mountain Rd, where the suspect was placed into custody.

The suspect was identified as Christopher Lee Brown, W/M, age 36 of Taylorsville.  The suspect was also identified as the son of the victim.  Brown had a firearm in his possession when he was taken into custody.    Further investigation showed that the shooting occurred as a result of a domestic dispute.

Alexander County EMS transported the victim to a designated helicopter landing zone off of Seth Deal Ln in the Sugar Loaf Community.  The victim was pronounced deceased by EMS personnel before arriving at the landing zone.