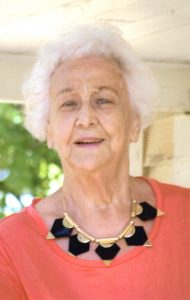 Trudy was born on August 10, 1936, the daughter of the late Avery Jay Stafford and Luda Pope Stafford.

She was employed at Lewittes Furniture for many years and, in later life, as a CNA. She was a faithful member of Millersville Baptist Church. She loved to go shopping, especially for clothes, and always enjoyed going to the beach.

In addition to her parents, she was preceded in death by her husband, Robert “Hall” Millsaps; a son, James David Millsaps; brothers, AJ, Paul, Frank, John and Henry Stafford; and sisters, Ruth Kerley, Beth Carver, Murial Stafford, and Linda McAlpin.

A private service will be held.

Adams Funeral Home and Cremation Services is honored to be serving the family of Alice “Trudy” Stafford Millsaps.