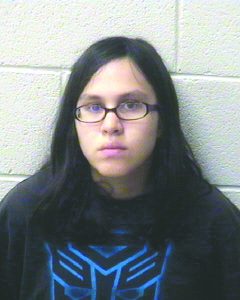 An Alexander County mother, Aishia Marie Pacheco, age 26, charged with second degree murder in the May 2016 death of her newborn baby boy, pleaded guilty to a lesser charge and was sentenced November 4, 2020, in Alexander County Superior Court before Judge Joseph Crosswhite.

Judge Crosswhite sentenced Pacheco to 84-113 months active sentence on the manslaughter felony. On the Willful Child Abuse, he sentenced Pacheco to 17-30 months, suspended, with 60 months supervised probation, supervision to begin at the expiration of the sentence above. The Court stated a longer period of supervision was necessary to ensure continuation of mental health treatment when Pacheco is released from the Dept. of Corrections. She is not to use, possess, or consume alcohol or drugs not prescribed. Docket money owed is lodged as a civil judgment against the defendant. The probation service fee was waived. The Court recommended mental health evaluation and treatment for Pacheco, to include doctor’s report with commitment, and to continue DBT treatment, if available.

Attorney Joel Harbinson is representing Pacheco. He stated that Pacheco’s reduction in plea is due to a forensic psychologist [who testified at the hearing] that she [Pacheco] had “significant mental health problems and issues at the time the crime was committed to negate the malice necessary for second degree murder,” said Harbinson.

Background of the case

According to Alexander County Sheriff Chris Bowman, Alexander 911 received a call on Tuesday morning, May 24, 2016, about 6 a.m., regarding a four day old male child who was unresponsive at a home on A.L. Fox Road off Rink Dam Road in the Wittenburg area.

Bowman said Alexander EMS arrived and the child was pronounced dead at the scene. Detectives with the Sheriff’s Office interviewed the mother, Aishia Marie Pacheco, then age 22 of the Wittenburg Community, that May afternoon. Pacheco said the child had bruises on his lips and nose. She then admitted to detectives that she had held the infant up against her chest, because he had been crying, thus smothering the baby.

The Sheriff was emotionally affected while speaking with media the morning after (May 25, 2016), noting it was difficult for investigators in dealing with the death of such a young victim. Bowman said the infant was Pacheco’s only child.

“It’s just a crying shame that something like this had to happen,” said Bowman, noting that there are resources in the community to help parents in situations like these.

Pacheco had criminal convictions in Alexander

In 2010, Pacheco, then age 16, was charged with the July 19, 2010, arson of a house near her own home on A.L. Fox Road in the Wittenburg Community. She pleaded guilty on May 7, 2012, to second degree arson in that case and was sentenced to 10-13 months, suspended, with two years of supervised probation, and to have no contact with the victims.

On February 3, 2014, Pacheco pleaded guilty to two counts of misdemeanor breaking and entering, and was sentenced to 45 days, suspended, with 18 months of supervised probation.