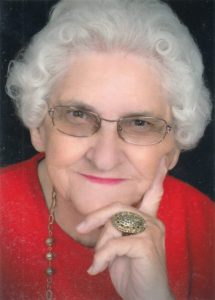 Elizabeth “Ann” Cartner, 88, of Statesville, went home to be with her Heavenly Father on Thursday, November 12, 2020 at Wilkesboro Health and Habitation.

A graveside service for Mrs. Cartner will be conducted at Society Baptist Church Cemetery in Statesville on Monday, November 16, 2020 at 2:00 p.m. Ann will be laid to rest next to her husband. Rev. Gary Jennings will officiate. Family and friends will serve as pallbearers.

Ann was born October 22, 1932, in Clover, South Carolina, the daughter of Clyde Allison and Della Irene Beatty Faires. She was a member of the Society Baptist Church in Statesville, where she served her Lord as a Sunday School teacher as long as her health would allow. Ann worked at Schneider Mills as a data processor for over sixty years. She was an avid reader and loved spending time with her family.

In addition to her parents, Ann was preceded in death by her husband, William Lonnie Cartner, and a brother, James Mason Faires.