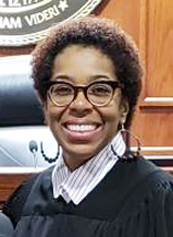 A county courthouse in eastern North Carolina has been named in memory of a judge with Alexander County ties.

On Monday, Nov. 16, the Brunswick County Board of Commissioners discussed naming that county’s courthouse in honor of the late Ola M. Lewis, Superior Court Judge. According to The Brunswick Beacon, the board passed a resolution to name the facility for Judge Lewis in a 4 to 1 vote. One commissioner was opposed to the resolution due to her belief that buildings should not be named after people.  The Beacon reports that board will name “the municipal building the Judge Ola Lewis Brunswick County Courthouse.”

Judge Lewis had many accomplishments during her service to the County and the State of North Carolina while on the bench.  Judge Lewis was appointed District County Judge in 1993 (at age 27, becoming the youngest person to serve in that capacity) serving until 2000 when she was appointed to a Special Superior Court judgeship by Governor Hunt.  She was the first female African-American District Court Judge in North Carolina, according to North Brunswick Magazine. Judge Lewis was awarded the Dogwood Award in 2017, the Order of the Longleaf Pine in 2018, and the Old North State Award in 2010.

Judge Lewis is the daughter of Mrs. Doris Parker Lewis, a retired School Principal, and the late Sgt. Major Mose M. Lewis of the US Army 82nd Airborne and retired School Administrator in Brunswick County.

Judge Lewis died Dec. 29, 2019, at age 54. State Senator Bill Rabon, Lewis’ godfather, told media outlets that the cause of Lewis’ death was a rare form of liver cancer. He noted that Lewis was the longest-serving female judge on the bench in North Carolina.

Ola Lewis was not the only judge in her family. Her first cousin, the Honorable Judge Ashleigh Parker Dunston, is a District Court Judge of Wake County. Judge Dunston is the daughter of retired Assistant District Attorney Jason R. Parker and Mrs. Elizabeth Springs Parker.

A groundbreaking ceremony is tentatively planned in the spring. A ribbon-cutting will take place in November 2021, when the building is complete.