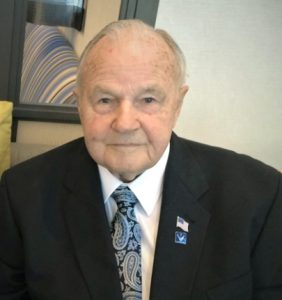 Honorable Benjamin William Hines, 87, of Taylorsville, went home to be with his Lord and Savior on Tuesday, November 24, 2020.

Ben Hines was born May 14, 1933, in Alexander County, to the late Kermit McHenry Hines and Katherine Marie Norton Hines Stout. He was a member of First Baptist Church, Taylorsville, where he shared his love for God, country, and his fellow man.

In addition to his parents, Ben was preceded in death by his wife of 40 years, Gwen Hope Kerley Hines; sisters, Margie Hines White Brown and Lilian Hines Pennell; and brothers, Ricky Stout and Steve Stout.

Full military honors are rendered because of Chief Master Sergeant Ben Hines’ 31 years of active service in the United States Air Force. Ben Hines second career was as a public servant in Alexander County. Ben was elected Register of Deeds in 1986 and served in that capacity until 2018 — 32 years and longest serving register in North Carolina at the time.

The family requests donations be made to the Benjamin Hines Memorial Scholarship. Make checks out to Alexander County Public Education Foundation with memo notation: Benjamin Hines Memorial Scholarship at 700 Liledoun Rd., Taylorsville, NC 28681. Or, the family asks for donations to the local post of the American Legion — Alexander Legion Post 170; checks can be made out to the Post and mailed to PO Box 1616, Taylorsville, NC 28681.

Ben’s favorite poem was High Flight written by 19-year old John Gillespie Magee Jr., which he often recited. Now that Ben has met his Glory, he has slipped the surly bonds of Earth and danced the skies on laughter-silvered wings; put out his hand and touched the face of God.

Adams Funeral Home and Cremation Services is honored to be serving the Honorable Benjamin William Hines.

The Honorable Benjamin W. Hines represented leadership in Alexander County, North Carolina, and beyond. He was the longest serving active Register of Deeds in the state of North Carolina, having served in that position 32 years. Since 1986, Mr. Hines served the interests of the citizens of Alexander County as their duly elected official to record deeds, birth and death certificates, deeds of trust, marriage licenses, and other important records. As Alexander County’s Register of Deeds, he safeguarded the vital records of all citizens of the county.
As a long-standing member of the Alexander County Republican Party, he helped usher in an era of strong Republican wins over the course of four decades. He personified integrity, service before self, and excellence in executing the duties of the Register of Deeds. Mr. Hines was the thirty-first (31) Register of Deeds for Alexander County since its inception in 1847. More impressively, Mr. Hines was the longest serving elected official in the history of Alexander County.
In addition to his role as Register of Deeds, the Honorable Mr. Hines served as an advisor to the Alexander Correctional Facility Community Relations Board, where he helped guide board activities for the benefit, welfare, and morale of inmates and facility staff. He also served as member and deacon at First Baptist Church in Taylorsville; and, he participated in many county veteran organizations such as American Legion, Disabled American Veterans, Veterans of Foreign Wars, as well as serving on the Alexander County Veteran’s Committee.
Before Mr. Hines’ political life in Alexander County, he served his county, state, and nation as a member of the United States Air Force for nearly 31 years. Mr. Hines reached the highest enlisted rank, Chief Master Sergeant, during his USAF career. He enlisted in the Air Force in November of 1952 and, during his military career, worked as an aircraft mechanic, crew chief, and flight chief on B-47 jet bomber aircraft, missile maintenance supervisor on Minuteman Missiles, as well as serving as the Senior Enlisted Advisor to the 351st Strategic Missile Wing at Whiteman Air Force Base, Missouri. During his military career, he deployed to many overseas locations including Sidi Slimane, French Morocco in north Africa; Moron Air Base, Spain; and, Bruntingthorpe Aerodrome, United Kingdom.

•    He visited all 100 NC counties while serving as the President of the NC Association of RoDs – NCARD
•    He has visited all 50 U.S. states over the course of his careers and lifetime
•    In 1962, as a crew chief he set the Strategic Air Command record for On-Time Take-offs at 197 at Hunter AFB, Savannah, Georgia. This record still stands.
•    If he couldn’t live in North Carolina, for whatever reason, he would choose to live in Wyoming
•    Is a great fan of Neil Diamond and has seen him in concert on seven (7) occasions
•    He gets a whole strawberry pie for his birthday that he can keep to himself, but he always shares
•    He was born May 14th, which was Mother’s Day in 1933
•    He shall be known as The Great and Wonderful Giver for his propensity to hand out “toys” and curios to anyone and everyone he meets
•    His favorite poem is High Flight by 19-year old John Gillespie Magee Jr., which he often recites
•    He has slipped the surly bonds of Earth and danced the skies on laughter-silvered wings; put out his hand and touched the face of God