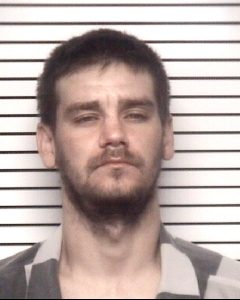 A man from Taylorsville who is a known gang member and was wanted in multiple counties, was arrested last weekend by authorities.

While speaking to the driver of the car, Jason Todd Mullen, age 35 of Rink Dam Road, Taylorsville, the deputies learned he didn’t have a valid driver’s license and the lawmen received consent to search the vehicle.

After searching the car, they located a concealed weapon, over one ounce of Crystal Methamphetamine, Marijuana, and multiple items of drug paraphernalia commonly seen with the sale and distribution of illegal drugs.

While working on the arrest paperwork, it was  determined Mullen had an outstanding arrest warrant from Lincoln County for Possession with Intent to Sale/Deliver Methamphetamine, Habitual Felon, and Possession of Firearm by a Convicted Felon. He was also entered as wanted by Cleveland County authorities for Felony Breaking and Entering.

Campbell said Mullen is a Bound For Glory Gang member, verified by the North Carolina Department of Adult Corrections.

Mullen is currently on probation for: Escape from Jail by a Felon and Felony Larceny of a Motor Vehicle.