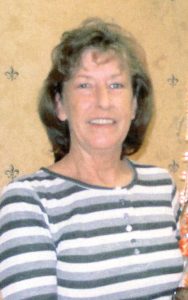 She was born Sunday, October 5, 1947, in Alexander County, to the late Jesse Monroe Fox and Elva Elizabeth Bruce.

In addition to her parents, Joan was preceded in death by a brother, James Larry Bruce, and a sister, Susan Auton.

Joan is survived by her partner of 25 years, Menzie R. Morrison of the home; two brothers, Dale Bruce and wife Tina of Hiddenite, and Robert Miller of Lenior; two half brothers, Harold Fox and Jerry “Babe” Fox, both of Stony Point; two sisters, Carol Baker and husband Charles of Taylorsville, and Debra Fox Taylor of Monroe; a sister-in-law, Marie “Tooter” Bradburn; two aunts, Johnsie Hartis, and Hilda and Howard Mayle; and many nieces, nephews, cousins, and special friends.

In lieu of flowers, memorials may be given to Carolina Caring Hospice of Newton, 3975 Robinson Rd, Newton, NC 28658.

Chapman Funeral Home is honored to be serving the family of Joan Toussaint.