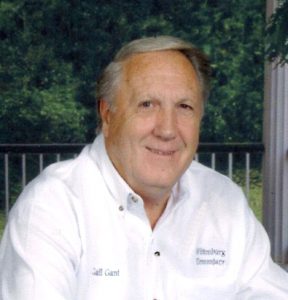 Gail F. Gant, 76, of Taylorsville, passed away on Saturday, December 12, 2020 at Frye Regional Medical Center after an extended illness.

Gail was born April 24, 1944, in Alexander County, the son of the late Clarence Gant and Elsie McAlpin Gant.

He was an upholster by trade for 40 years and then began the career he loved dearly, custodian and handyman at Wittenburg Elementary School. He worked there for 20 years and he considered the staff his second family. He loved all the staff and children and was known by all as the man who could fix anything!

He loved tinkering in his garage and no project was too big for him to tackle. He also enjoyed camping and fishing in his spare time. He was a member of Millersville Baptist Church and he loved his Sunday school class and his teacher, Scott Ballard.

Those left to cherish and honor his memory include his wife of 56 years, JoAnn Martin Gant; his two sons, Robert (Jane) Gant, and Brian Gant; three grandsons, Cameron (Haley), Logan, and Zachary; a great-grandson, Beckham; and his brother, Max (Helen) Gant.

A book signing will be held from Noon until 5 p.m., Thursday, December 17, 2020 at Adams Funeral Home. A memorial service will be held at a later date.

In lieu of flowers, memorials may be made to: Millersville Baptist Church Christian Academy.

The family wishes to thank all the nurses at Frye Regional who took such great care of Gail, we could not have asked for more caring, attentive nurses!

Adams Funeral Home and Cremation Services is honored to be serving the family of Gail F. Gant.