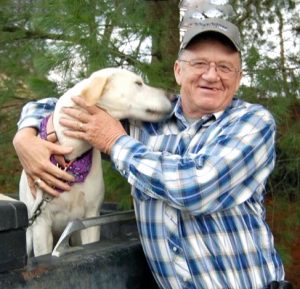 He was born January 9, 1946, in Iredell County, the son of Thelma Lowe Allen Hamilton of Monroe and the late Atwell Allen.

He was a US Army National Guard veteran. Doffie was a truck driver who drove for Conover Chair for 42 years and later retired from Sherrill Furniture. He was a member of Millersville Baptist Church, where he loved his Sunday school class.

Doffie loved his dogs particularly, Ellie Mae. He enjoyed deer hunting, but most of all he loved his family, especially his grandchildren.

Including his father, he was preceded in death by his brother, Raeford Allen.

Including his mother, those left to cherish his memory include his wife of 18 years, Linda Icenhour Allen; his daughters, Robyn Price, and Marla Bowman (Jason), all of Taylorsville; grandchildren, Caleb Price, Luke Price, Abbie Bowman, and Ryan Bowman; his sister, Debbie Plyer (Cliff) of Monroe; and sister-in-law, Phyllis Allen.

A private service will be held at 1 p.m., Saturday, December 26, 2020 at Millersville Baptist Church but the service will be live streamed on Facebook. Rev. Bill Orren and Rev. Brian Kerley will officiate. Burial will follow in the church cemetery with military honors accorded by Alexander County Veterans Honor Guard. The body will lie-in-state from 1-5 p.m., Wednesday, December 23, 2020 at Adams Funeral Home Chapel.

Adams Funeral Home and Cremation Services is honored to be serving the family of Steven Gary “Doffie” Allen.