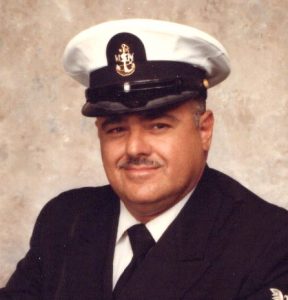 Salvatore was born March 5, 1937, in Queens, New York, the son of the late Edward Rao and Angelena Gangi.

He was a US Navy veteran, who served during the Korean Conflict, Vietnam Era, and Cuban Crisis. He served in the US Navy for 30 years, retiring as a Senior Chief. He received the Navy Commendation Medal. He was President of the reunion group, Composite Squadron 33 Association. Salvatore was a member of Mt. Olive Lutheran in Hickory. He was a wood worker and volunteered at the Senior Center, where he enjoyed doing puzzles.

Those left to cherish and honor his memory include his wife of 39 years, Judith Yount Rao of the home; his children, Kimberly Rao of Wisconsin, Kristy Rao Stanley of Norfolk, Virginia, Shera D. McDaniel of Knightdale, and Sean Smail of Taylorsville; seven grandchildren; sister, Patricia Pellecchia of Jackson, New Jersey; and brother, Richard Sarno of Hicksville, New York.

The body will lie-in-state from 1-1:45 p.m., Tuesday, January 5, 2021 at Mt. Olive Heritage Hall in Hickory with a graveside service to follow at 2 p.m. in the Mt. Olive Lutheran Church Cemetery with full military honors accorded by Alexander County Veterans Honor Guard. Rev. Ryan Ray and Vicar Denise Henry will officiate.

Adams Funeral Home and Cremation Services is honored to be serving the family of Salvatore Rao.