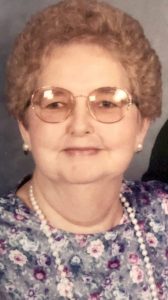 She was born Friday, May 13, 1938, in Alexander County, to the late William Glenn Robinson and Jettie Williams Robinson. She was retired from Hunt Beinfang after 20 years, and a member of Tabernacle Baptist Church of Statesville.

In addition to her parents, Phyllis was preceded in death by her husband of 57 years, Billy Shaw Chapman; son, Danny Shaw Chapman; three brothers; and three sisters.

Memorials may be given to Tabernacle Baptist Church, 494 Lippard Farm Rd., Statesville, NC 28677.

Chapman Funeral Home is honored to be serving the family of Mrs. Phyllis Ann Robinson Chapman.