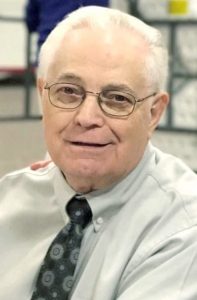 Reverend James Dean Cooke Sr. went home to be with his Lord and Savior on Saturday, January 23, 2021 after a period of declining health.

He was born February 4, 1939, in Avery County, to the late Gleason and Virginia Cooke. James accepted Christ as a young adult and began preaching at the age of 27. He started a small church, Disciple’s Mission Non Denominational Church in Caldwell County in 1969. He served as pastor there until his health no longer allowed it. He also started a small church in Poga, Tennessee in 1986.

He loved his Lord, his family, and people in general. His mission in life was to share God’s love with others and the Salvation of others. He worked in furniture in the finishing department at Hancock& Moore as well as Old Hickory Tannery until he suffered a stroke in 1997. He also owned a small finishing shop, J & B Furniture Finishing, where he enjoyed creating new finish colors.

Those left to cherish his memory include his wife of 54 years, Brenda Austin Cooke; his two sons, James Cooke Jr. (Tammy) of Conover, and Jody Cooke of Claremont; his two daughters, Virginia Cooke Farris (Tim) of Valdese, and Billie Cooke Walker (Brian) of Hiddenite; a brother, Billy Wayne Cook of Granite Falls; as well as a sister, Brenda Huffman (Kenneth) of Shelby. He truly valued the title “Pawpaw Cooke” and enjoyed his precious grandchildren, Courtney Cooke of Hickory, Austin Cooke of Texas, Gleason and Anna Lee Cooke of South Carolina, Ashley Farris Powell (Derrick) of Valdese, Haven Farris and Addie Farris of Valdese, and Breah and Briley Walker of Hiddenite. James was also blessed with three great-grandchildren to love on, Presley Jane Cox of Hickory, and Charley and Lawson Powell of Valdese. He also has a special aunt, Hazel Shore of Hickory.

Memorials can be made to Fountain of Life Worship Center.