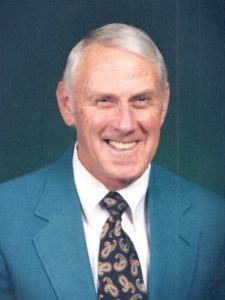 Born November 13, 1933 to Eugene and Pauline St. Clair, Jim grew up on a family farm in Taylorsville. He was the middle child of three boys – Ned and Bob. Jim was a loving husband and father, former professional baseball player, Army veteran, and 2018 Alexander County Sports Hall of Fame Inductee. He excelled as a custom upholsterer for many years.

Sports have always been an important part of Jim’s life as a participant, coach, mentor, and spectator. He was an avid Duke Basketball fan. Despite his achievements as an athlete, Jim was a humble man best known for his kindness and love of family.

Jim will be remembered for his smile which brought light to everyone he met. In his words, the three best days of his life were the day he married his wife, Jean, and the birth dates of his two daughters, Pam and Penny. When Penny married her husband Pete in 1987, Jim gained a son who shared his love of sports and golf. He also cherished his grand dogs, Gidgi, Brock, Megan, and Murphy.

A graveside service at Taylorsville Cemetery will be held on Saturday, January 30 at 1 p.m. In lieu of flowers, the family requests donations to First Baptist Church of Taylorsville, where Jim faithfully served as a Deacon and Sunday School teacher for over twenty years.

Special thanks to Jim’s Angel Team from Hospice, Medi Home Health, and many caregivers at Iredell Memorial Hospital.